This past weekend ushered in some rain.  Unfortunately it cancelled our backpacking trip in the north Koolaus.  Friday night I told the group it would be miserable if we went, I felt bad because we had been planning it for weeks.  So instead we went chasing waterfalls.

Saturday morning it rained and rained.  We decided to sleep in a little and get a late start.  We met at Swanzy beach around 1 pm and hit up a 300+ ft waterfall I had seen almost a year ago.  It only forms when there is heavy rain.  Near the beginning of the trail head we were greeted by a fast flowing stream.  Amanda and Will's dog Tango, led the way.  We got to the first obstacle where the group had to carry Tango up a fast flowing waterfall that was two tiered.  Cory helped out with that because he's and expert climber.  We got to the waterfall shortly after.  It was just like I remember the last time I visited except it had a little more water coming down.  The wind generated from the waterfall was making it chilly so Katie and I posed for a few pictures but went downstream to wait for everyone else because it was too cold.  We came back out the way we came and went to a restraunt with some ramen to warm us up after.

Saturday night the rain didn't let up.  We planned to hit more waterfalls!  Our first stop was in Nuuanu.  Nuuanu is notorious for waterfalls.  But the waterfall we wanted to see is really rare and only a handful of people seen it's full effect up close.  There are stories of an upside down waterfall.  We went search and we definitely found it.

Driving up the Pali highway on Sunday it was so cloudy and rainy but through the clouds we saw it and were super excited.  We met up with a few friends.  Emma, Jessie, Will and Amanda met up and headed to the obscure trail head.  We headed Mauka for about thirty minutes and hit the wall.  The rain was falling and water was misting everywhere.  The waterfall wasn't running against the wall but instead falling and getting blown up by the wind hence, "upside down waterfall". The name is Waipuhia and we hit two of the chutes on our initial approach.  We had to hug the wall and scramble a little to hit the third and final chute.  This one was flowing well!  Sometimes the water would fall and sometimes it would be blown by the wind.  It was extraordinary to see and just VERY different than any other waterfall I had ever seen.  When we were finished watching we headed back to our cars and went to our second hike.

Our second hike was Koolaupoko Chutes.  This time we only visited chute four and one.  It wasn't flowing as well like the last time we went because we went later in the day when the rain let up a little.  As we were hiking there we could see that all four chutes were going but not like the last time we were there.  Chute four was going good, we visited there first.  On the way there I got some nasty cats claw thorn stuck in my fingers, it hurt a lot!  Passing chute three and two we headed straight to one after that.  Because it wasn't flowing as well I could actually take my DSLR out and shoot a little.  The wind coming off the falls wasn't string either.  After hiking to all of these places we decided to finish there.  Tomorrow was going to be our grinder hike.

Veterans Day we did the "Going against the flow" hike.  I was really looking forward to it because this time around the water levels were a bit higher which made for a more challenging and technical hike.  We had a larger group this day than the other days.  Our friend Garvin decided to join us on today's hike.    We hit over eighteen waterfalls.  Most of which you have to climb or have the aid of a rope to help you up.  We celebrated at the last falls with some beer and snacks.

Veteran's Day weekend was great even though we didn't get to do what we originally planned.  Hopefully we get to do our North Koolau trek soon! 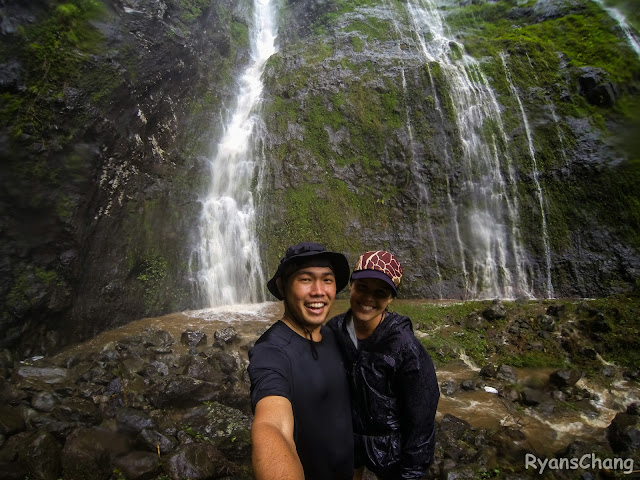 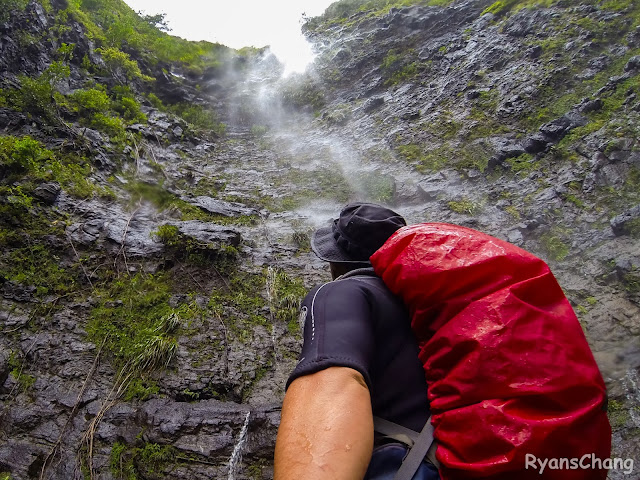 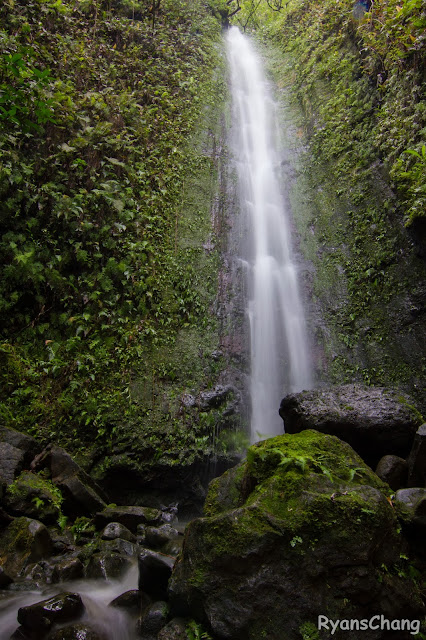 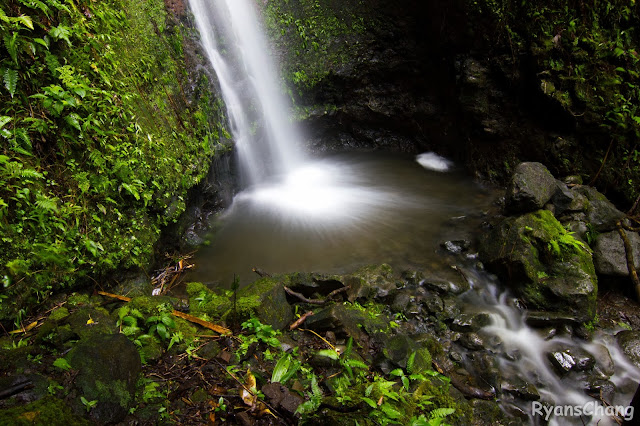 Where the water falls into at the 4th chute. 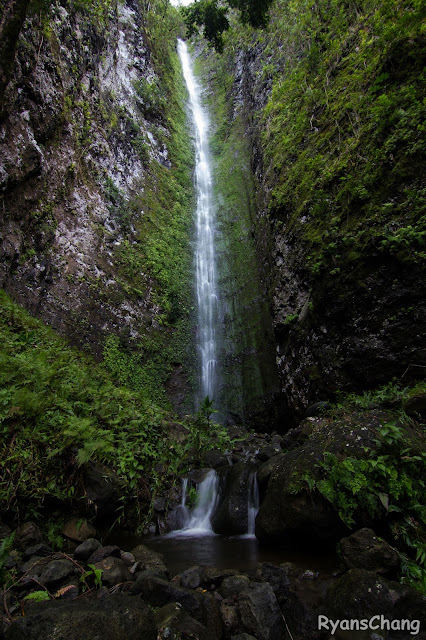 The biggest falls we saw all weekend. 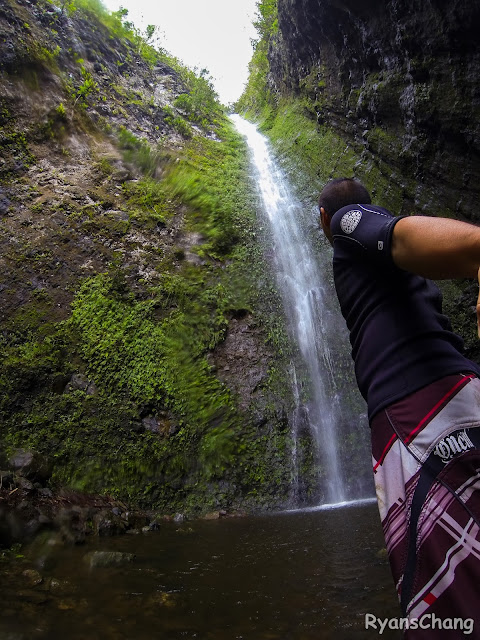 Hard to imagine the last time I was here I was being blasted by mist. 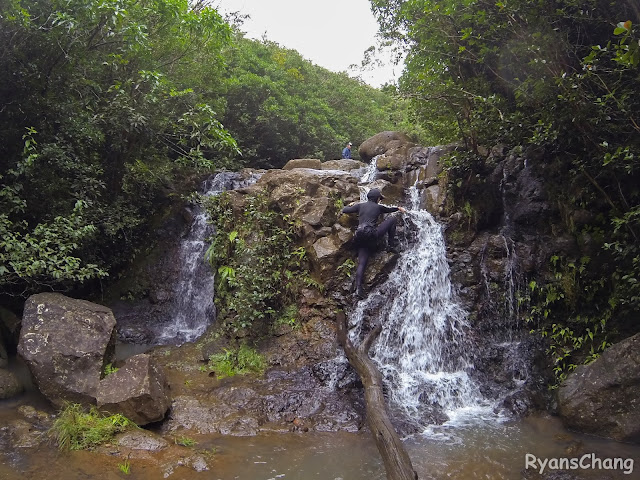 Our Veteran's Day hike consisted of climbing series of waterfalls like the one pictured above.

Veteran's Day weekend from Ryan Chang on Vimeo.
Posted by Ryan's Chang at 10:17 AM