Happy New Year guys it's 2014!  This is my first official blog post of the new year.  So far this year it's been a pretty rough start.  I've been VERY LAZY with getting into the mountains and exploring.  Been sort of in a slump but, I've been surfing a lot.  With my mornings off during the week I've been body boarding Makapu'u, sandys, and sometimes north shore.  Winter has been pretty good and we are only in the middle of it.  Hiking was put on hold for a few weeks until this past weekend.

I had my doubts on backpacking for three days because I haven't been in "hiking shape" but that got shut down when I completed it. First day we started at Poamoho trail.  Luckily Andrew could take Cory's car back down from the trail head.  Katie, Nate, and Francis joined in on this hike as well.  We hit the summit in no time with clear views of the windward side.  We took a short break and decided to turn left at the summit.  In about two hours of summit walking with no rain but plenty of mud we hit our first camp spot.  We put our heavy bags down and relaxed for the rest of the day.  Nate went out exploring and found some water just in case we needed.  He went exploring for a few hours while the rest of us waited for a sunset.  Too bad the clouds rolled in and we didn't have a really good sunset like we hoped for.

As night fell we started to cook our meals.  Most of us opted for dehydrated meals, some had noodles.  An hour or so passed and the clouds cleared up.  Stars were really bright and I was really tired.  Some stayed up and took advantage of the night sky.

The next morning we woke up to clouds but as soon as the sun came up the clouds started to move away and burn off the mountains.  It made for an epic sunrise and the day turned out to be a good one!  We left our first camp site and continued on the Ko'olau summit trail.  I felt as though my pack became really heavy since the first day.  I had a full bag of water and some of my clothes got wet so I'm guessing that's what was making my bag heavy.

After meandering both on the leeward side and the windward side for about an hour we hit the castle junction.  Francis had to leave us because he had some business to attend to.  We had a relatively good break at that point and bid Francis safe hiking.  I took the ram rod position and led the group through most of the mud pits and the nasty leeward sections of the KST.  The leeward sections were choked with Clidemia and some shrubs which made leeward sections a nightmare.  I always looked forward to making it to the windward sides which were much more clear.  I'm sure everyone else was happy when we reached those sections.

After about two more breaks and hours in mud pits and pushing through uki grass and branches we met up with the Koloa fence.  Fifteen minutes on the fence we found our next camp spot.  Luckily we were there really early.  Cory, Katie and I opted to hang out play cards and talk story.  Nate on the other hand is an animal and opted again to go out exploring... I don't know how he does it!  I was beat and just wanted to vegg out.  Nate came back before dinner time as usual and he showed us what he had found.  He showed us some cool bug and spiders.

Just before dinner we watched the sun set and saw a cool rainbow.  Chili mac and beef was on the menu for dinner for Katie and I.  Cory had some pasta and Nate opted for noodles.  After some hot food we were satisfied and played some catch phrase game.  I was horrible at the category celebrities but everyone had a good time.  After a few hours we were all beat.  We all knew we had to wake up early the next morning to get our ride out.

In the morning we packed and left around 8:30.  After an hour of hiking we reached the old Kawailoa cabin grounds.  The view was so clear we stopped and had a break there.  Nate showed us where there was water just in case we were in a pinch up there and ran out of water.  We continued for another forty five minutes and reached Laie summit.  Made it down Laie so fast I was so happy to see that grassy football field. 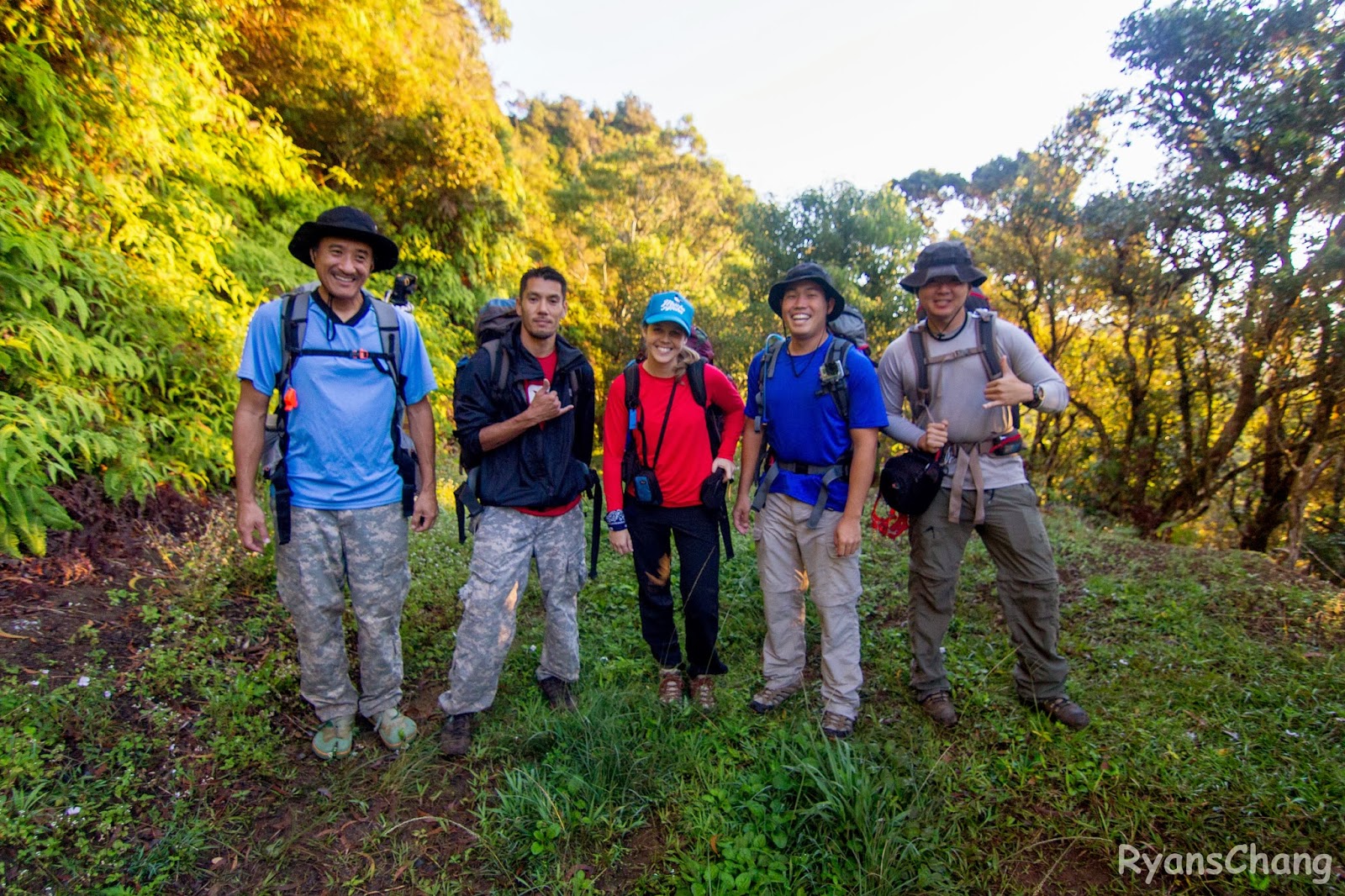 The full group doing the hike across the KST.  (L to R) Nate, Francis, Katie, Ryan, Cory
Photo by: Andrew 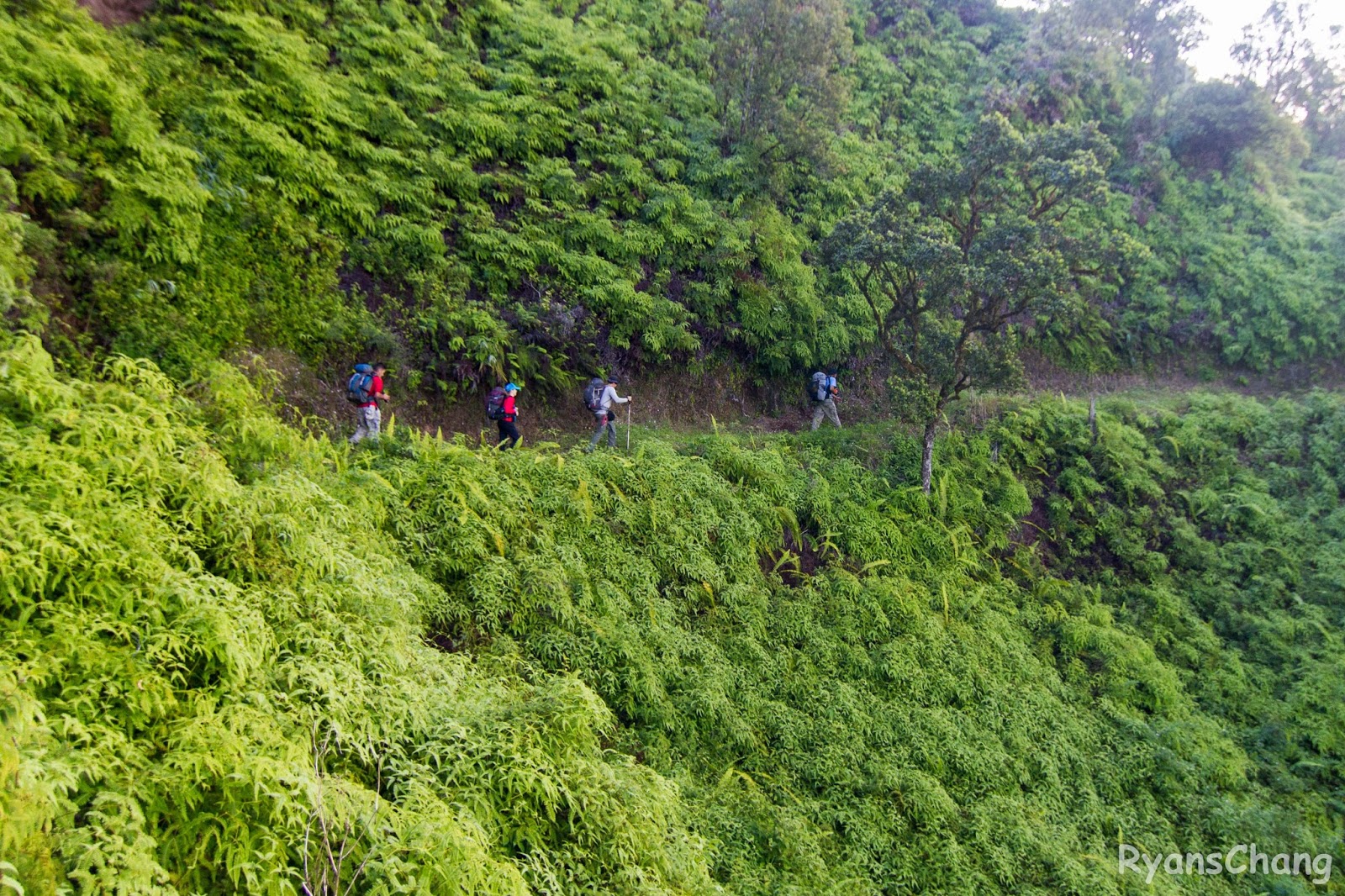 Beginning our journey on a well groomed trail. 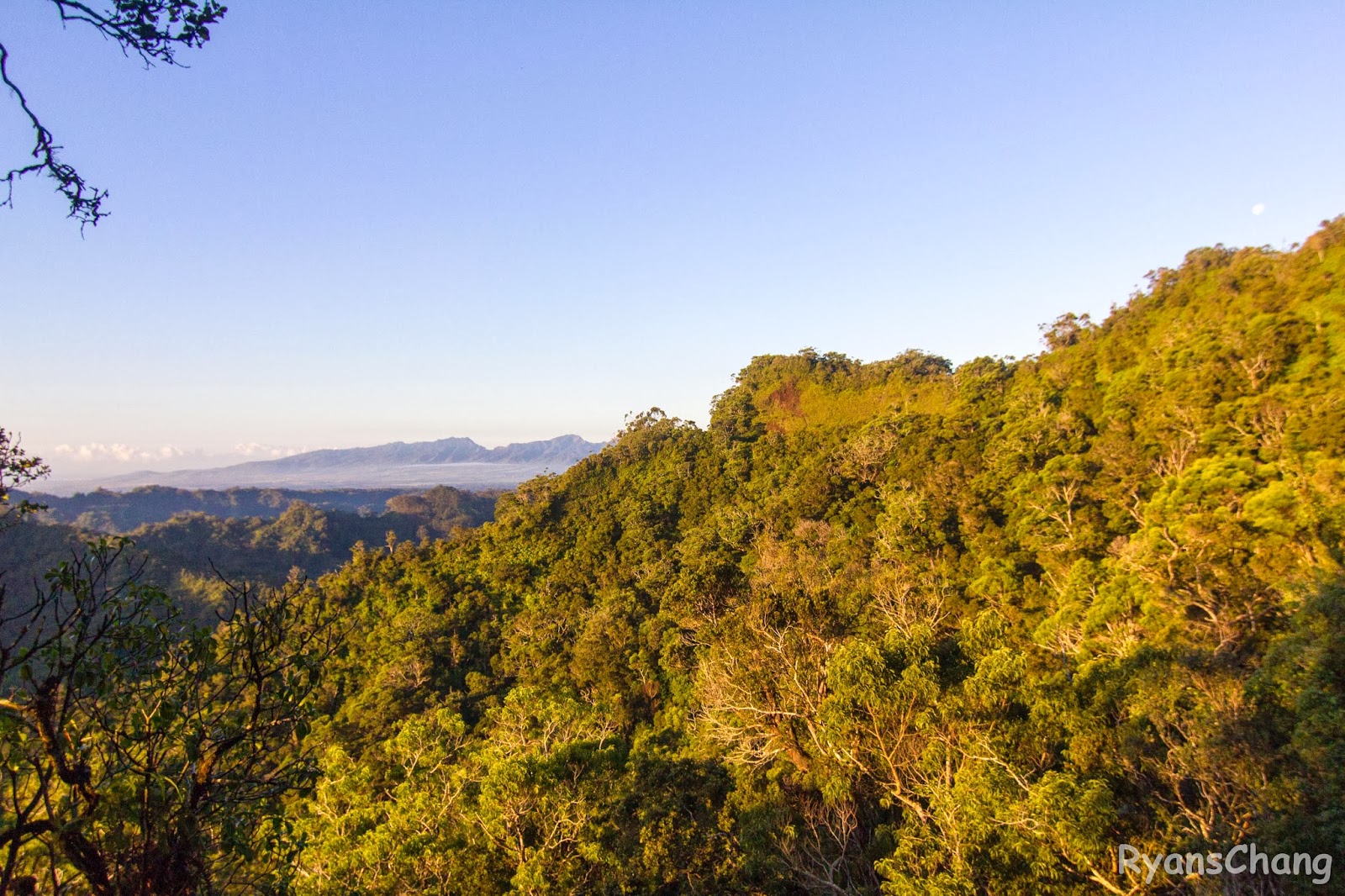 The morning light was really warming. 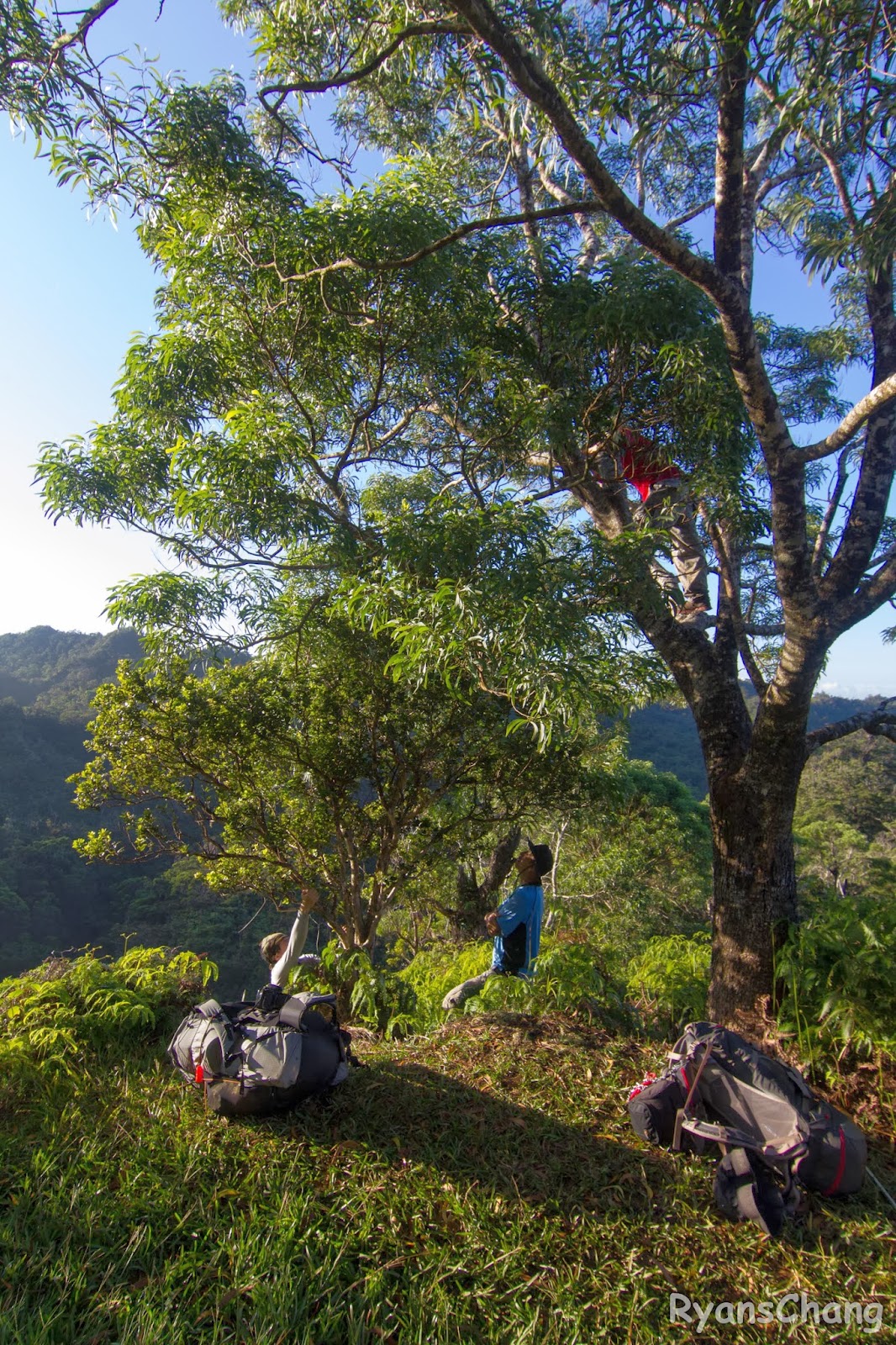 Taking a break and looking for bugs are Cory and Nate.  Francis is hiding in the tree, can you spot him? 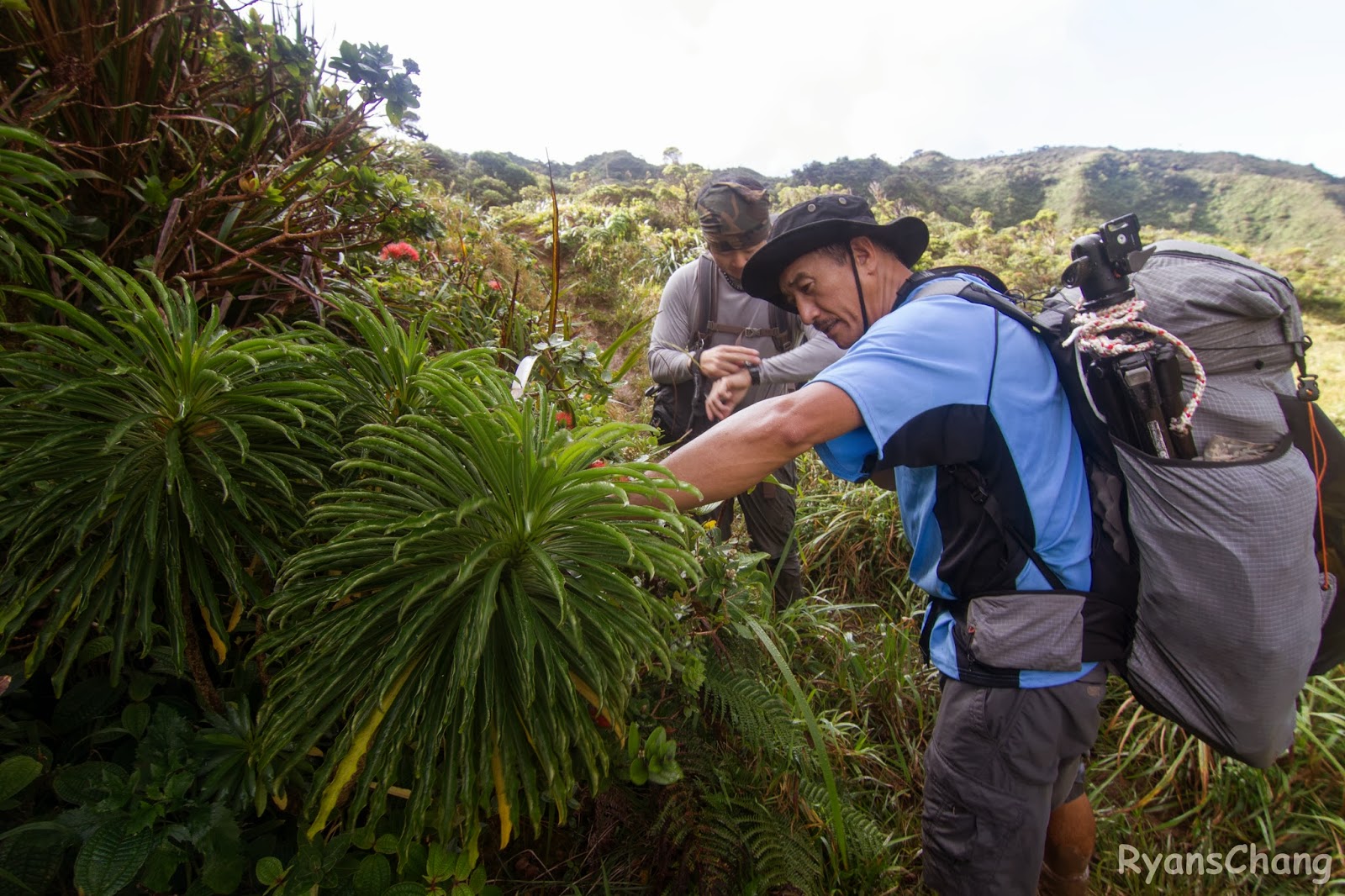 Nate checking out the lobelia.  He is a plant and bug expert in my eyes.  If you ever get a chance to hike with him he will probably know everything you need to know on the trail plant and bug wise. 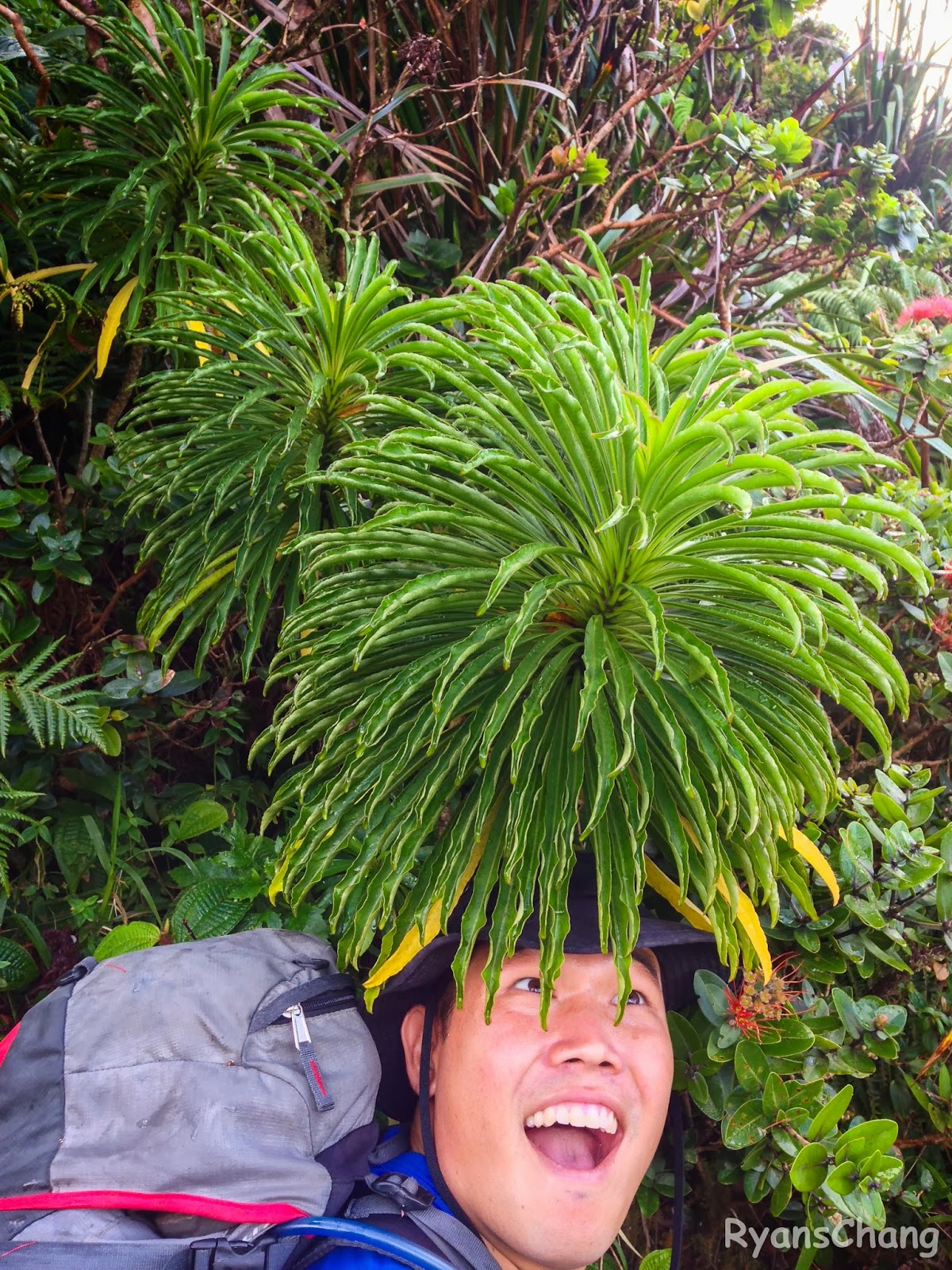 Cory took one of my favorite photos on this trip.  That's me under the lobelia, pretending it's a hat! 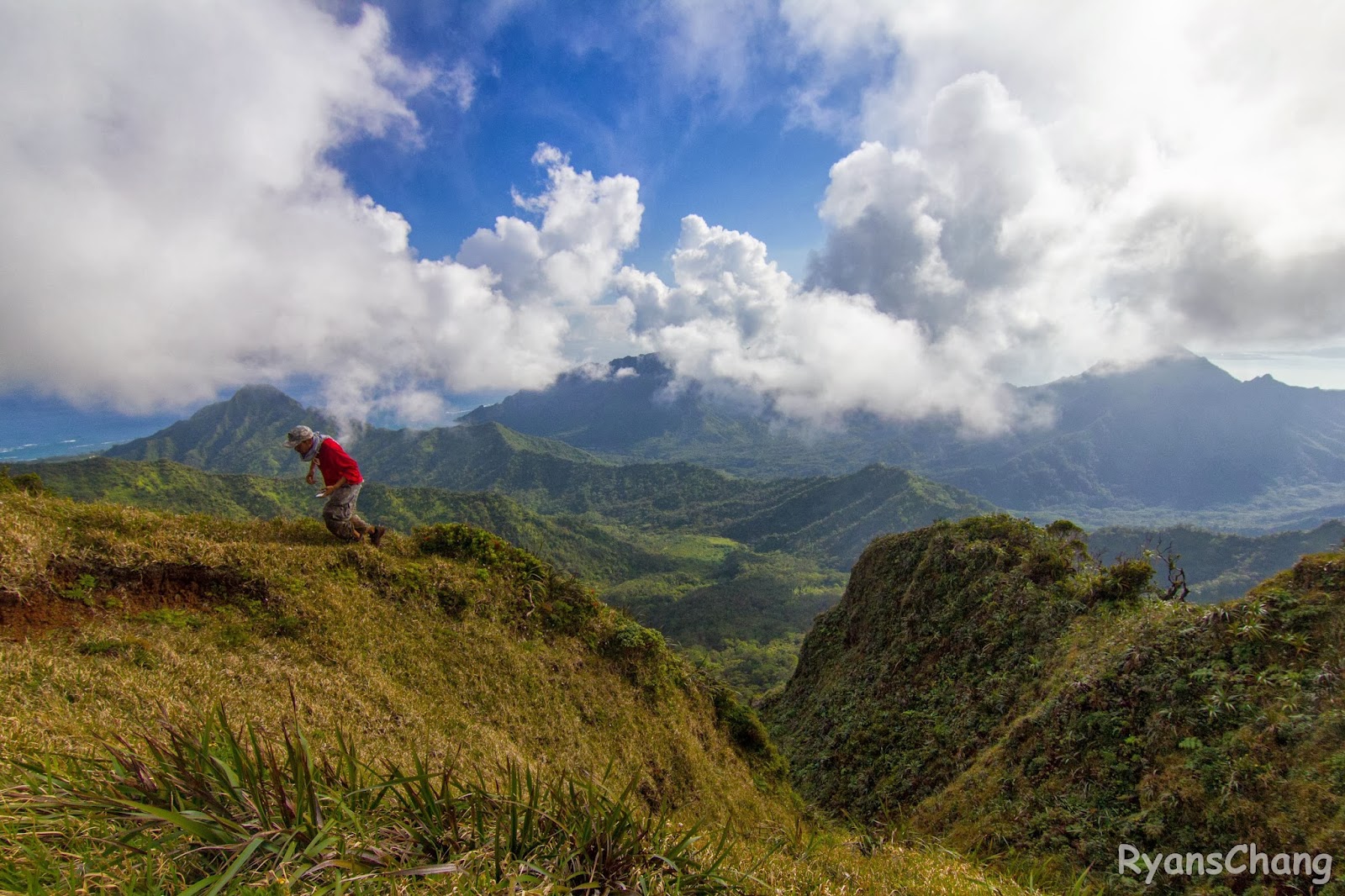 Francis coming back from checking out the view.  The clouds were burning off the mountains this morning and making for some epic views looking into Punalu'u and Kahana valley. 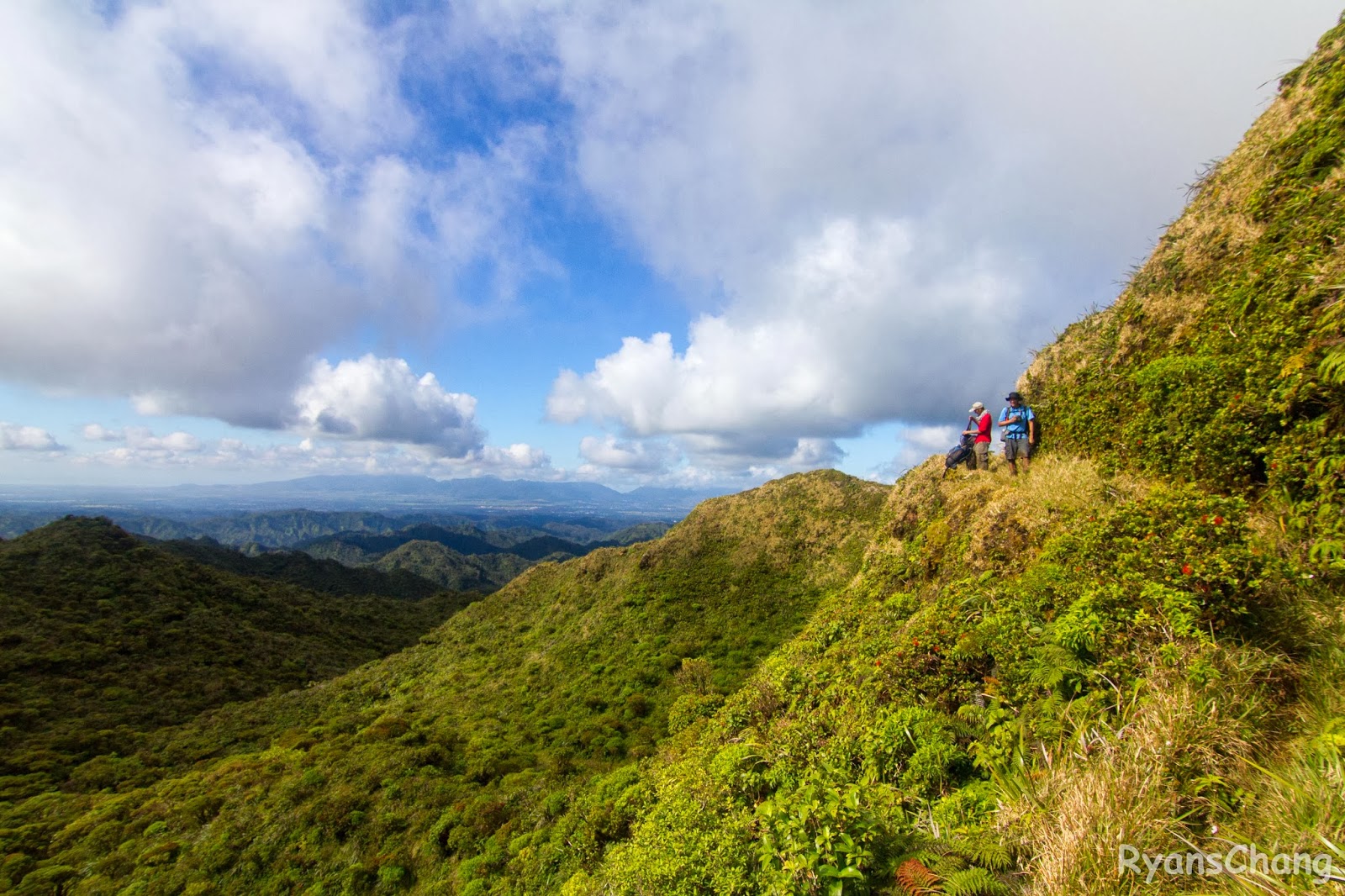 Hiking with these views are very distracting.  Many of us stopped and took pictures. 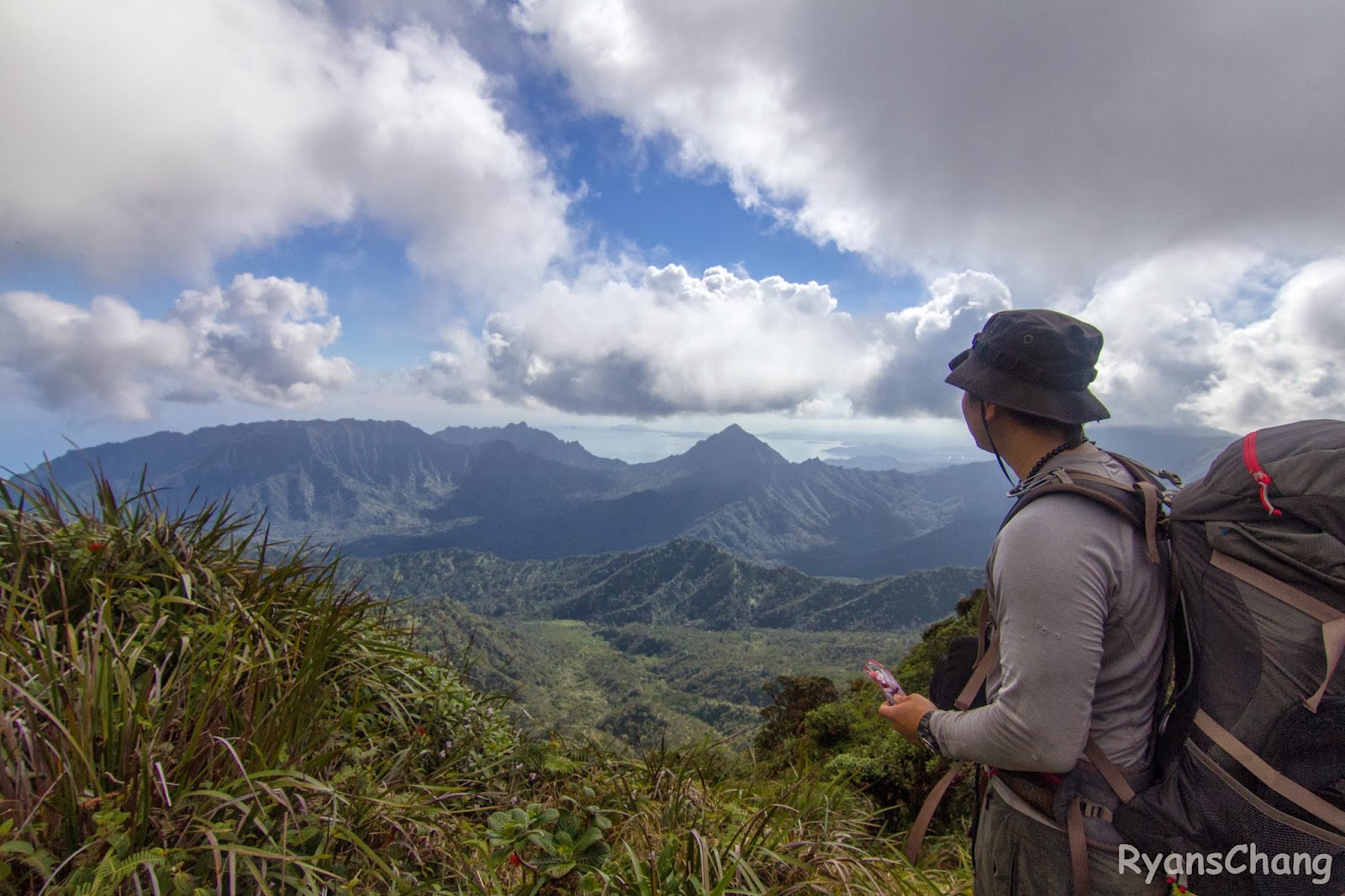 Here is Cory eating a snack and enjoying the view. 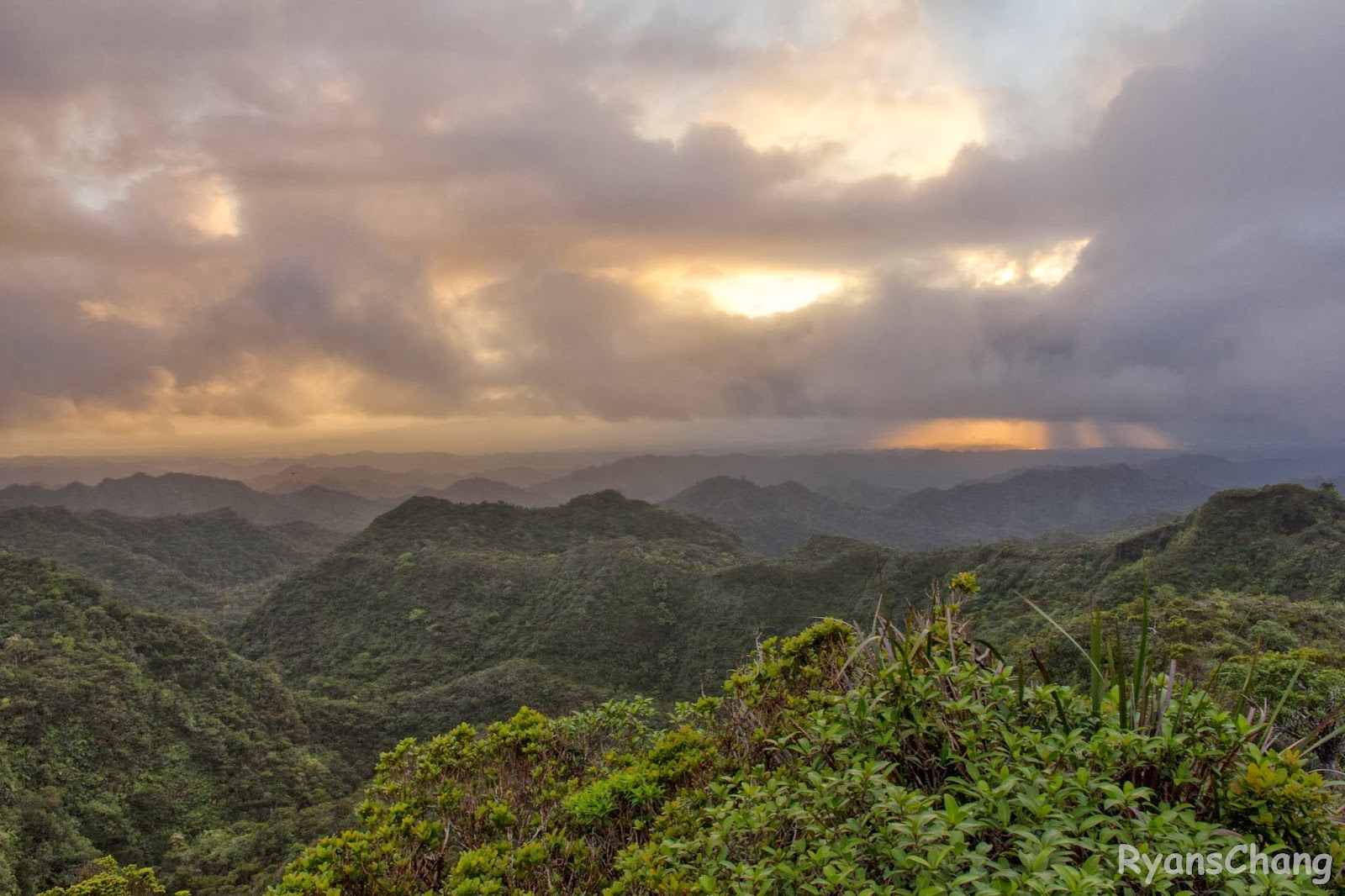 We reached our first camp spot well before sunset.  We hung out till sunset waiting to see if the clouds would go away but it didn't.  Rays were gleaming through the clouds making for an eerie beautiful sunset in the mountains. 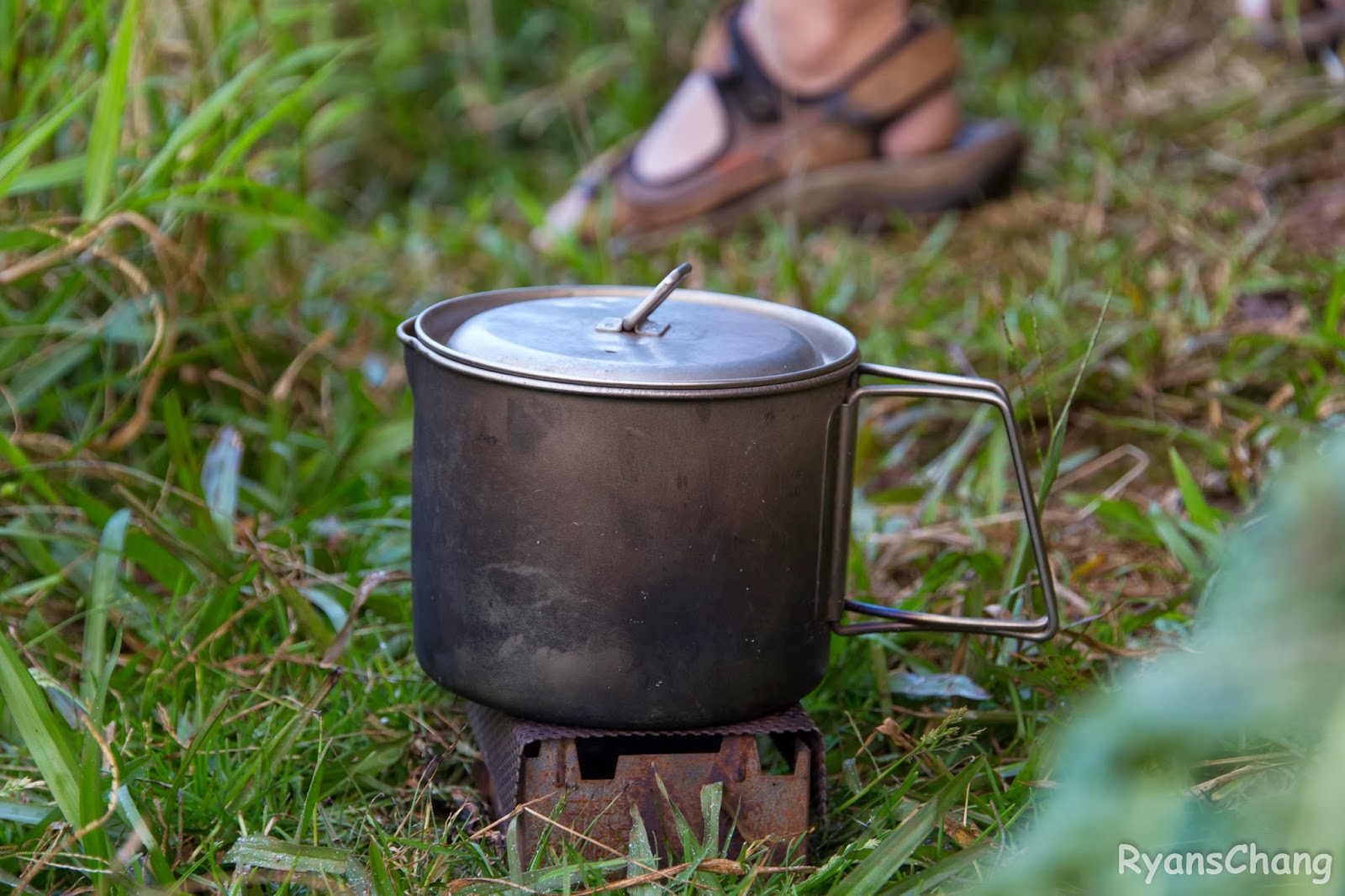 Boiling water was essential.  Nate's boiling method was with esbit. 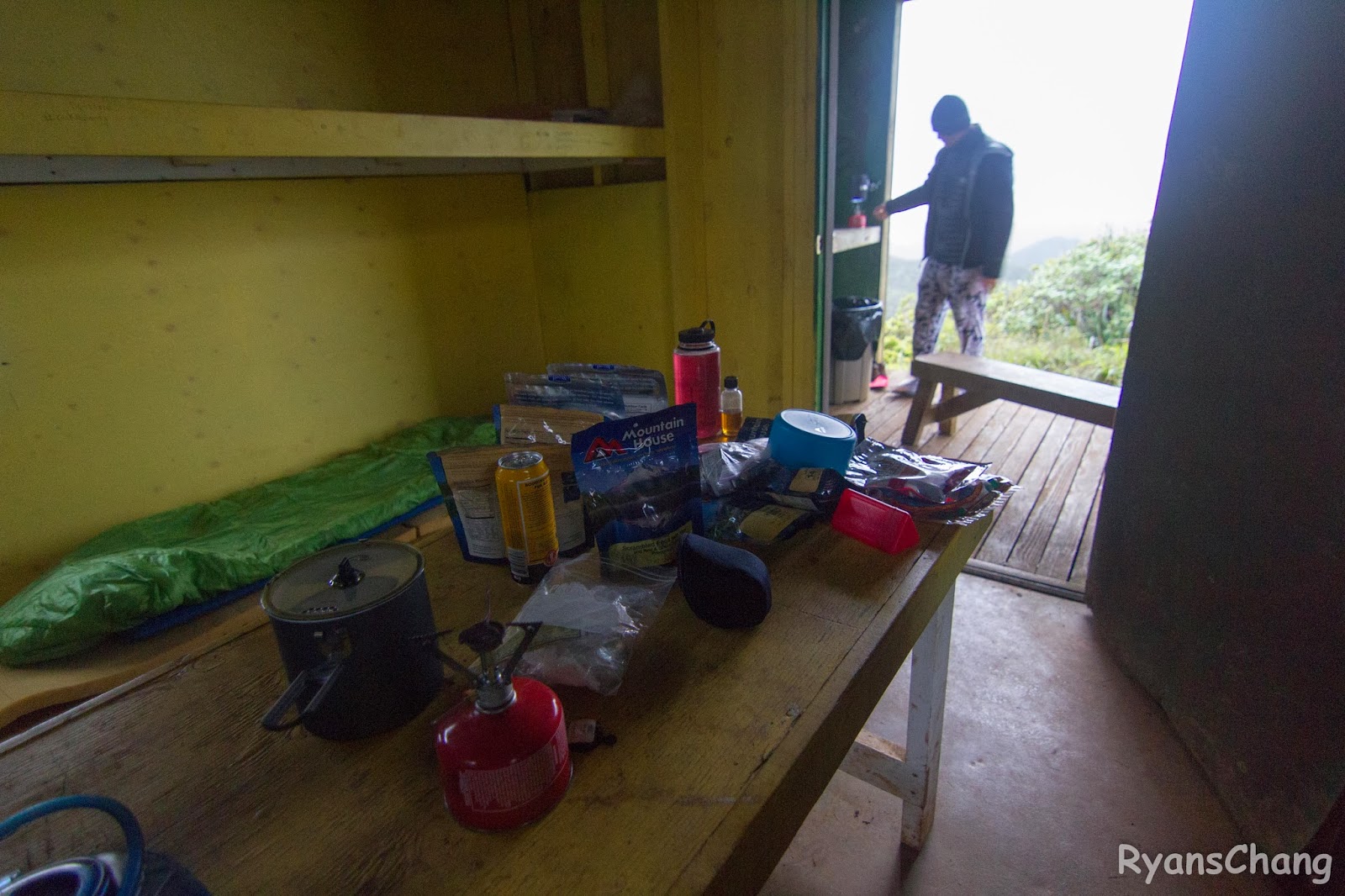 Katie, Cory and I used pocket rocket stoves to boil our water.  We opted for dehydrated meals. 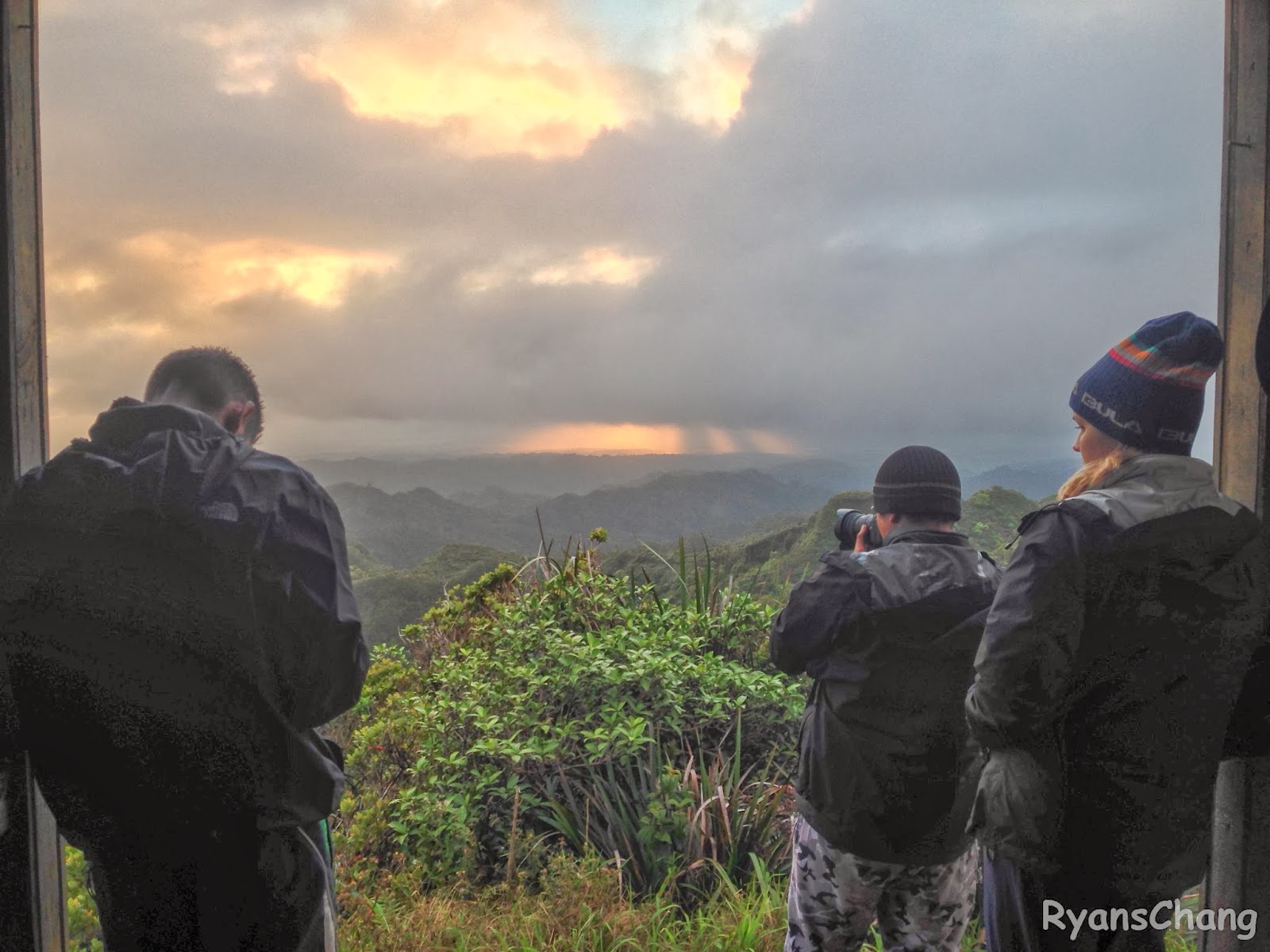 Last remaining light from the sunset. After dinner the night was still on the mountains, no clouds and a light wind.  It's rare to get this in the mountains so we opted to photograph stars at night.  The glow is from the city, light pollution. Just before I took this picture we were socked in.  The clouds obstructed our view but, when the sun rose it started to burn off all the clouds.

From this day on I didn't take too many pictures.  We were battling some DEEP mud pits and opted not to bring my camera out.  On the last day when we were heading out I only snapped a few pictures. 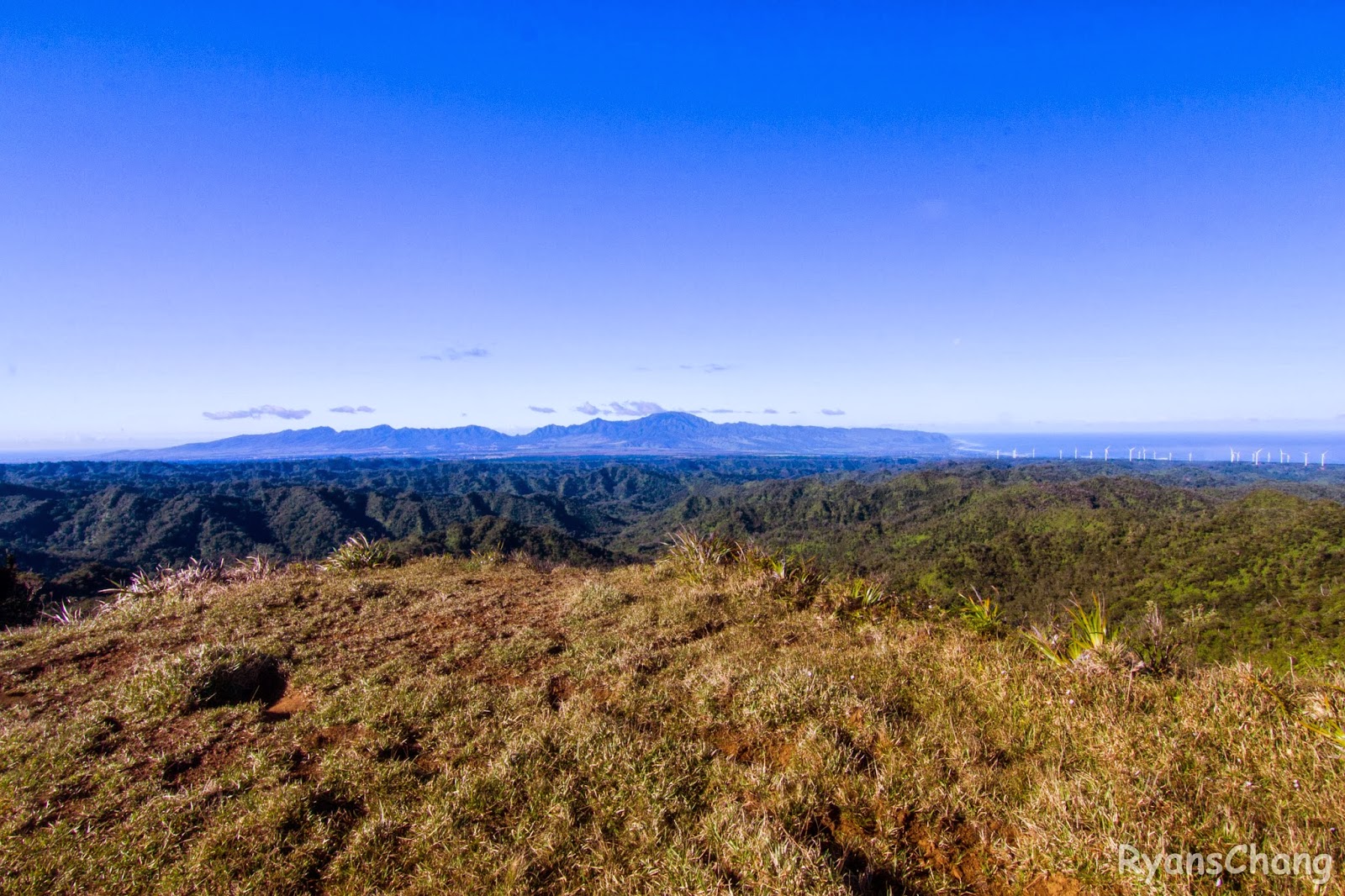 The last picture near the summit of Laie. 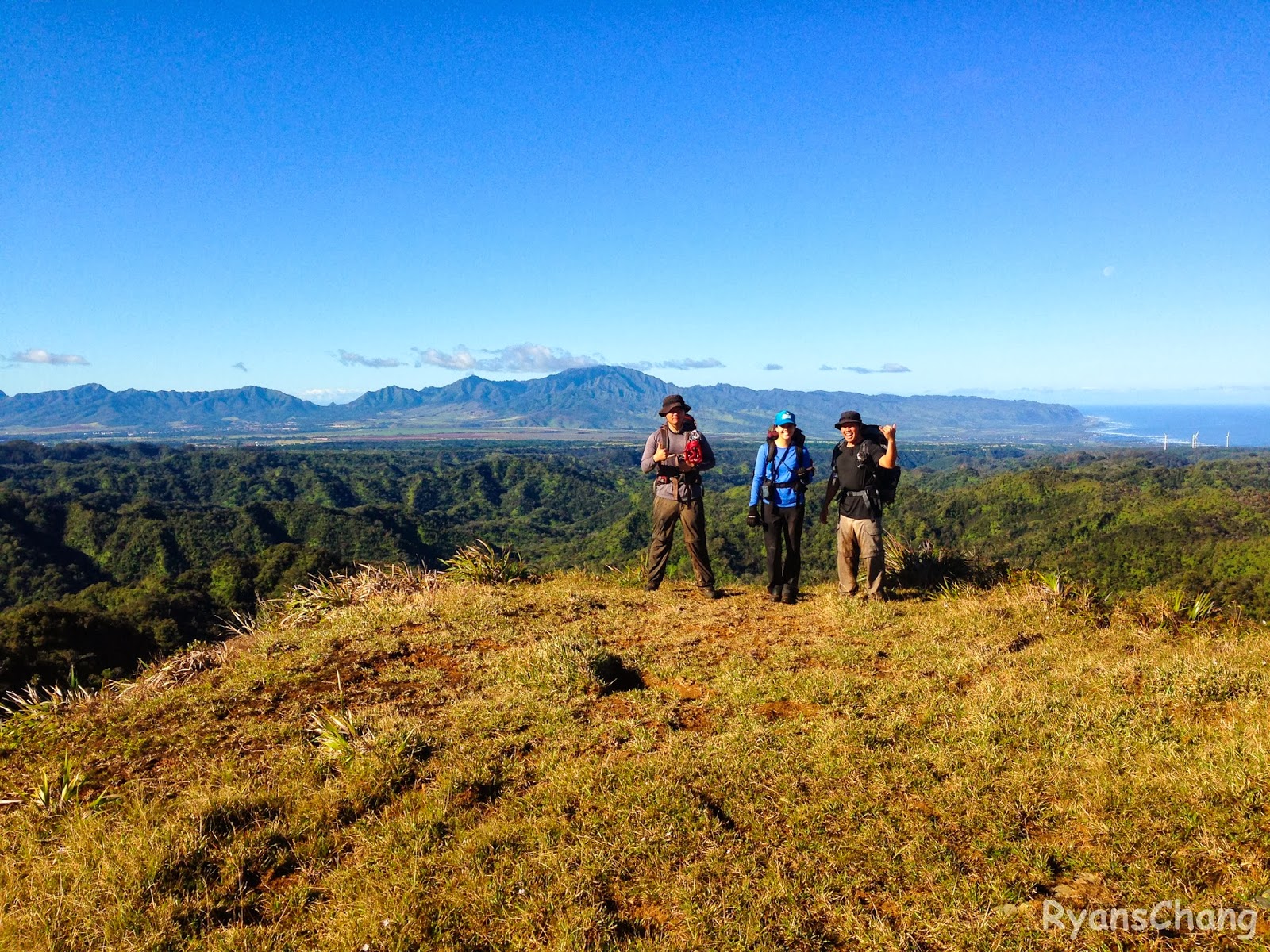 The group that exited.  Picture courtesy of Nate.


Due to where we stayed I won't disclose the where abouts of where we stayed.  It's always good to dual purpose our hikes.  We obviously had a great time up in the mountains but Cory is a scientist and he did a little research for the company he works for.  Nate checked out rare native plants and bugs during the down time.  We ALL were learning something whether it'd be bugs, plants, or finding our way through the mountains.  I'm not saying this is what you all should do but it is a great opportunity to learn about the island we live on when you hike.

Happy New Year again and hope to see you all on the trails!

Here's what I also enjoy doing when I'm not hiking.  Just a short clip.

Makapuu from Ryan Chang on Vimeo.
Posted by Ryan's Chang at 1:27 PM No comments:

The year 2013 had some good times and some bad times.

First of all my goals for 2013.  To meet new people, to get to know them and  not to judge them by the reputations others give them.  Second the find someone and make her happy.  Lastly to start this blog and upkeep it.

I think I've struggled with the first goal.  Of course I could have done better but  I've met many new people that I now call friends.  I've traveled with people that I thought I didn't think I was close with.  In the end what really mattered is not how many people I met and became friends with but how many people I met and kept in contact with, who my true friends were.  Quality over quantity.  Near the end of the year I axed people that don't care to keep in touch or people that I've never met on social media.  I'm kind of starting the new year fresh and hopefully I get to meet more people and make more new friends next year.

The second goal was to make someone happy.  At the beginning of the year and for many years before this I stayed single and dated around a lot.  I knew that this year I wanted to meet someone special.  I also knew what I wanted in a woman.  I met Katie an adventurous hiker and my partner in crime, she is the person that is now my girlfriend and she is really happy.  I would say that this goal is accomplished.

Third is this thing that I am writing on now.  The blog... Ryanschang.  I still like writing on this thing and lots of friends and family continuously read and watch my videos.  I'm pleased how it turned out.  I will continue blogging until I feel that it's now longer necessary.  It's kind of cool to look back on what I did this past year.


Of course there bad times... My parents after years got divorced.  Shortly after my grandpa passed away.  During the beginning of summer I moved to Kapahulu with mom because of the divorce.  We are slowly renovating the house and making use with what we got.  I got to see my grandpa before he passed and he was laid to rest at Punchbowl Memorial.

There through all the hard times was Katie.  I don't know what I would do without her.  Through the bad the good.  This year I got to travel a lot.  I got to see places I've never dreamed of.  After meeting Katie we were off.  Trip after trip, Kauai, Maui, Kaho'olawe, and back again to Maui, and I got to spend Thanksgiving on Big Island with mama Ersbak.  Those were some serious good times!

2014 is here... what are some of your New Years resolutions?

I haven't put much thought into mine yet but I have an idea on what I want next year.

1) Social media has taken a lot away from my "life".  I've already begun the steps of "cleaning" and deleting people that I don't talk to or don't keep in touch with any more.  I axed instagram and started over again.  Having over a "1000" friends is kind of hard to keep in touch with.

2) Find another job that would supplement the YMCA or start something new and fresh.  I've applied for an internship over the summer and hopefully I land that position... If I don't I'll probably buckle down and go to school after summer time.  I need to finish something right?

3) Not sure what my last one should be... need more time to think.

Those are some of my resolutions and hopefully I can complete them in a year.  Happy New Year everyone!