I haven't been updating my blog but I've been so busy enjoying life.  Over the past few months I've taken up an interest in photographing birds, the birds you rarely see.  You need to go deep into the mountains where most of the forest is dominated by ohia and koa trees to find these colorful, beautiful, and small, winged animals.

The first time I saw a native forest bird on Oahu was when I was hiking with my friends coming down a ridge trail on the East side of the island.  My friend Josh pointed out a red bird in a koa tree.  It wasn't a cardinal and he said, "I think that's and 'apapane!"  I tried to bring my camera up to photograph it but before I could it flew away.  I would have never guessed that Oahu still had native forest birds.  I've only seen those on the outer islands.  That same week I decided I had a little bit of time before work so I should go see if that really was a native forest bird.  I hiked up to where we saw it in the koa trees and waited around to see if they'd come around.  To my amazement THEY did.  Four landed on some dead branches.  That's when I snapped this picture. 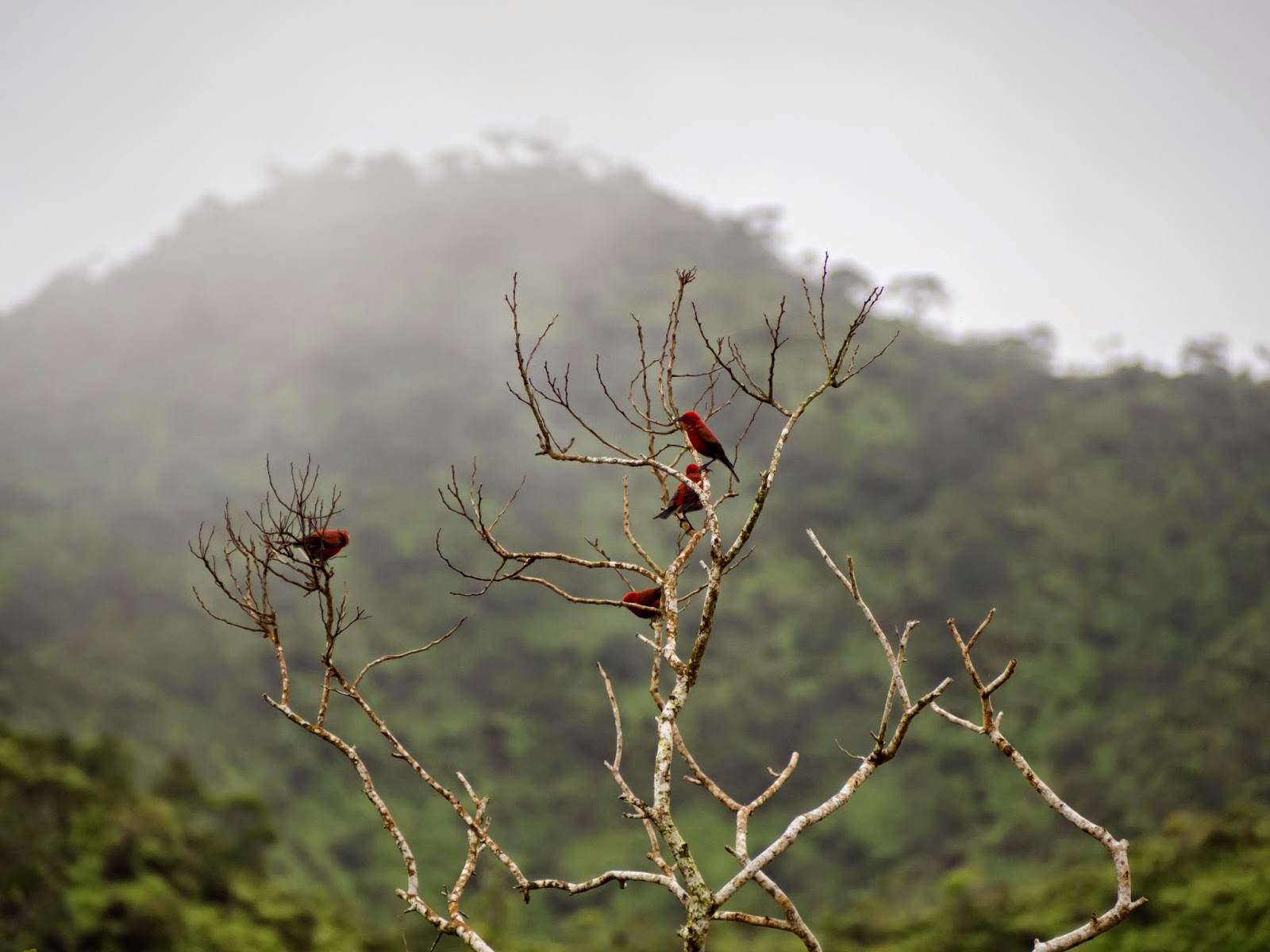 I was instantly hooked then and there.  How could I have not seen these birds since I started hiking!?  From then on, every trail that I hiked within the last few months I've had my telephoto lens on while hiking.  Snapping photos like this. 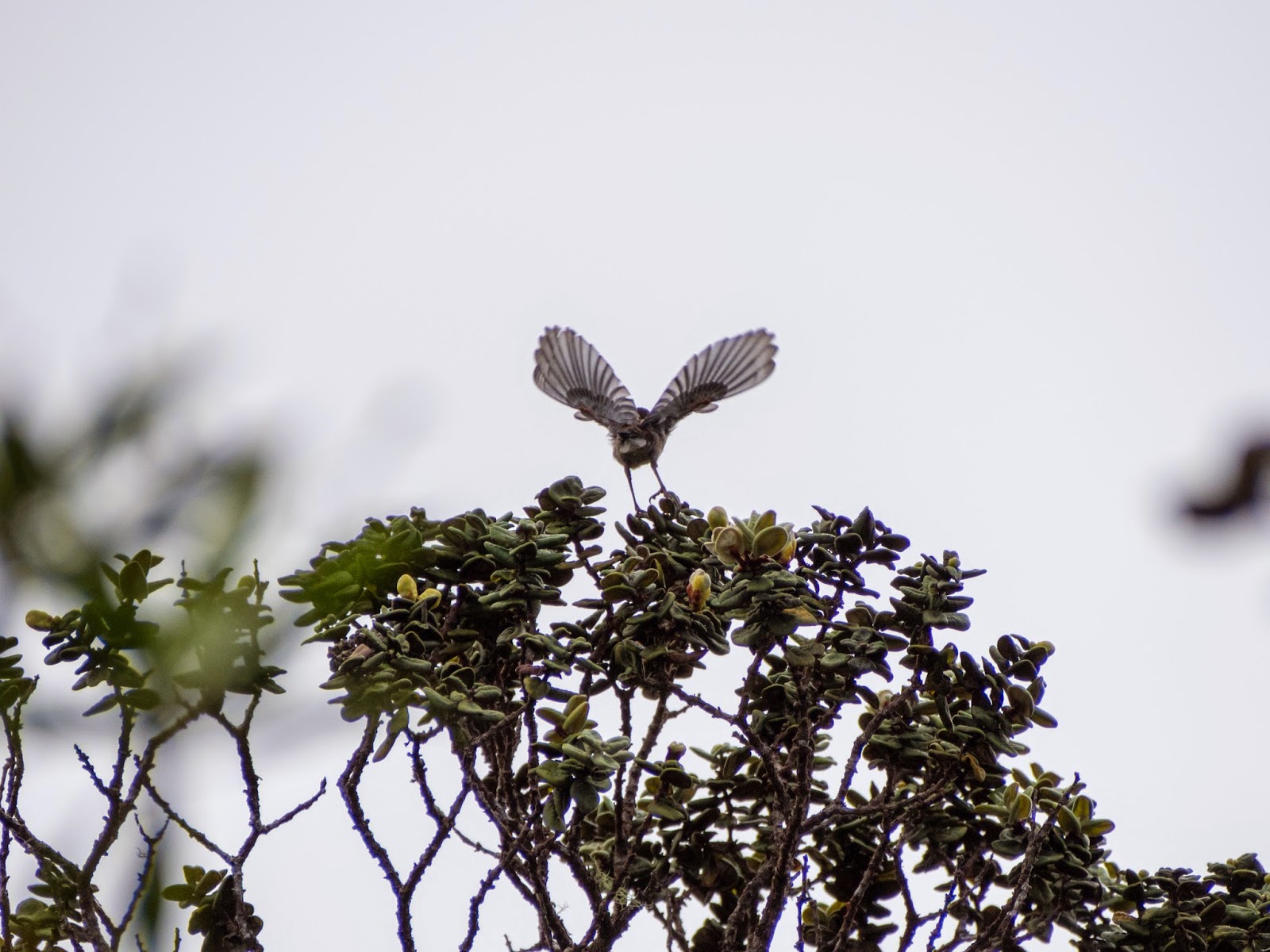 Juvenile 'apapane (Himatione sanguinea) spreading it's wings and taking off.


I've found out that hiking and trying to take pictures of these guys are extremely difficult, they are very skiddish and wouldn't come close.  So I would wait, in the bushes on some days and get photos that were a little better. 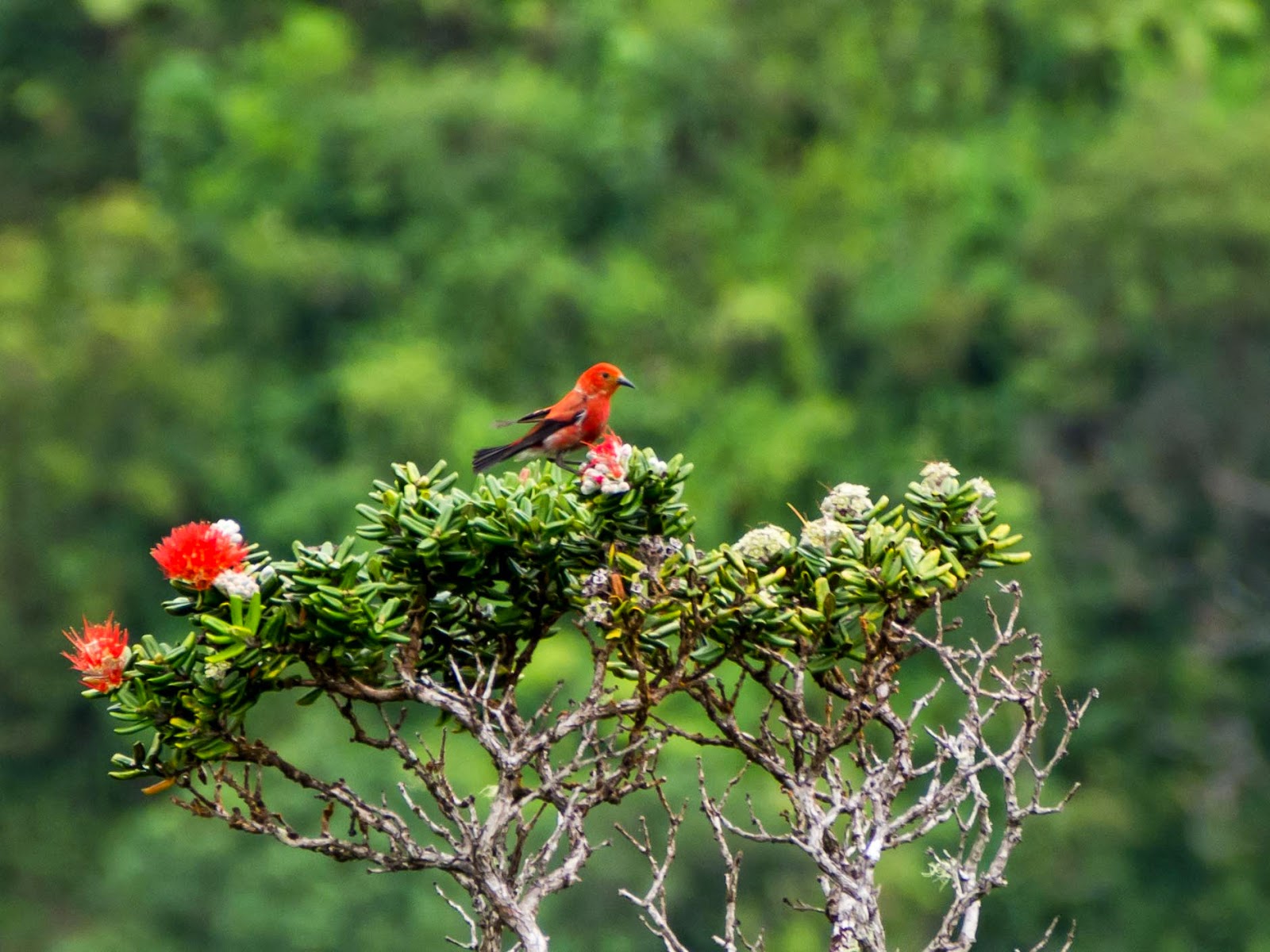 'Apapane on some ohia canopy.

Sitting and waiting allowed me to compose shots a little better.  I can sit and watch and ohia tree and think about where the bird might land. 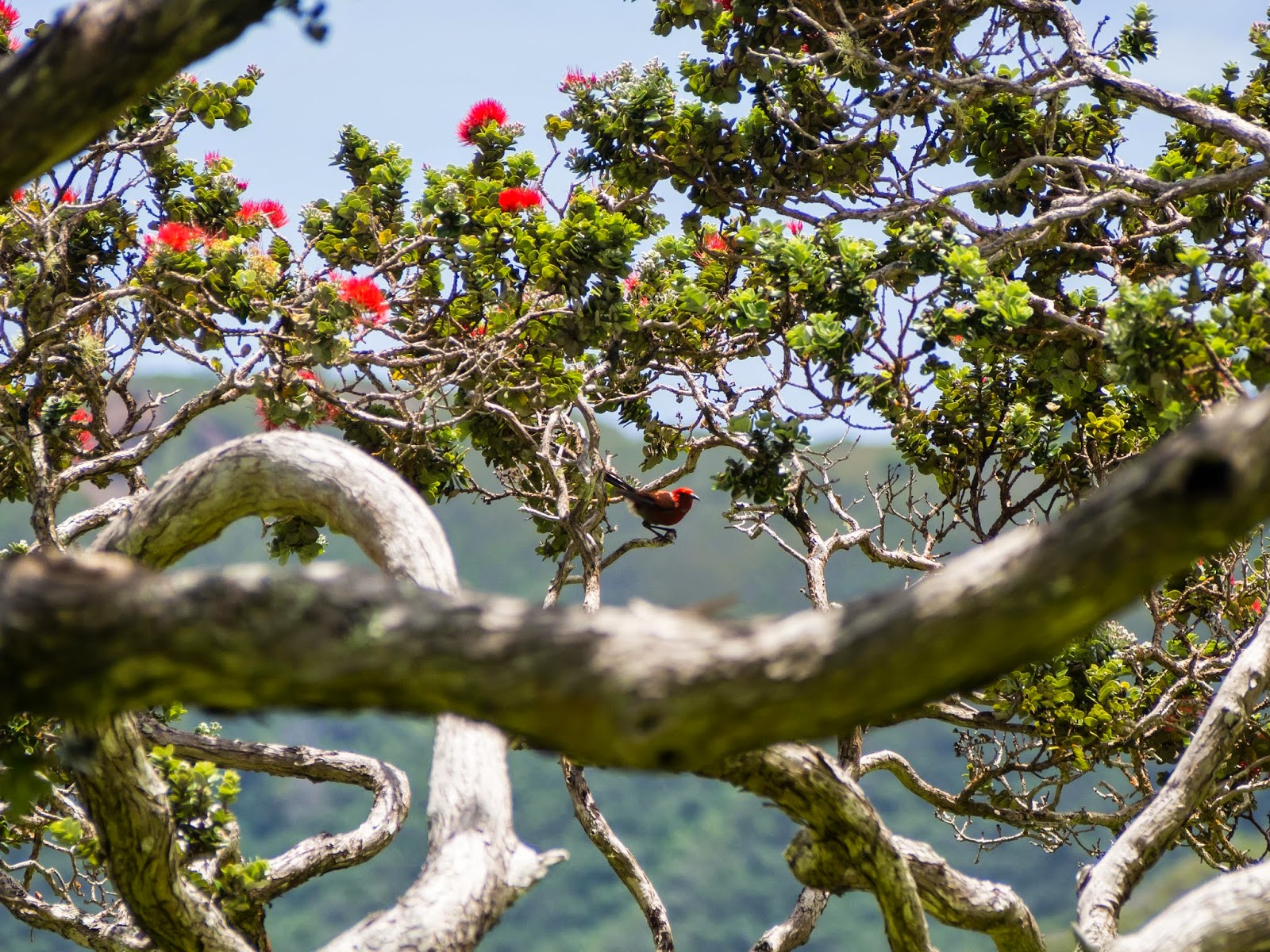 'Apapane flying between some branches.


What's pretty amazing is that my friends told me that 'apapane aren't too common on O'ahu.  But for the first few months that's all I've been seeing.  Those guys and non native forest birds.  They said there are two more birds that are more often seen by birders, the 'elepaio and the 'amakihi.

The next native forest bird that I started to see after 'apapane were the O'ahu 'amakihi (Hemignathus flavus).  The first time I saw them was on a central O'ahu hike. 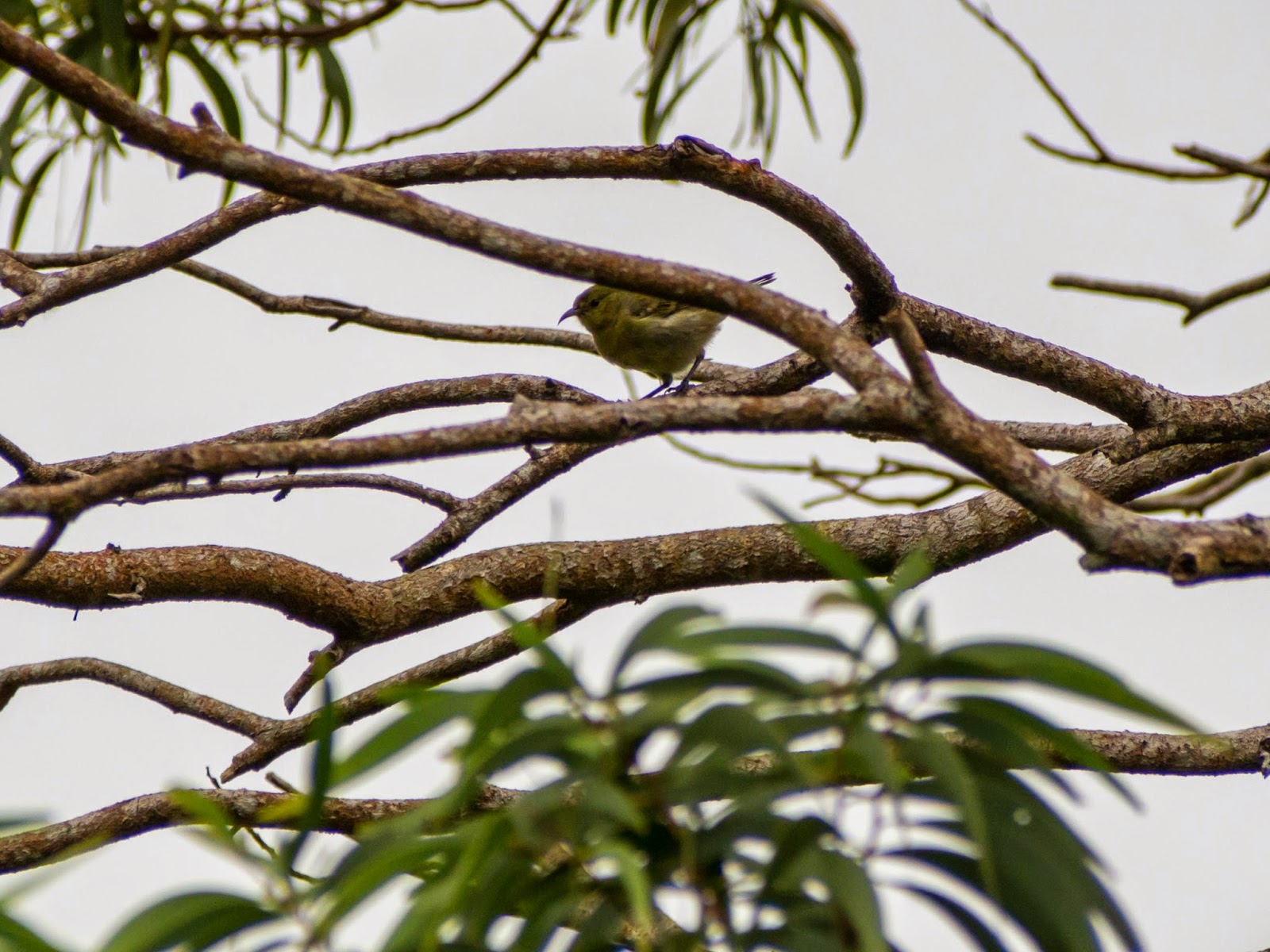 This guy spotted me and was scared to come any closer.


I never could get a good picture of this species, but sooner or later I will. 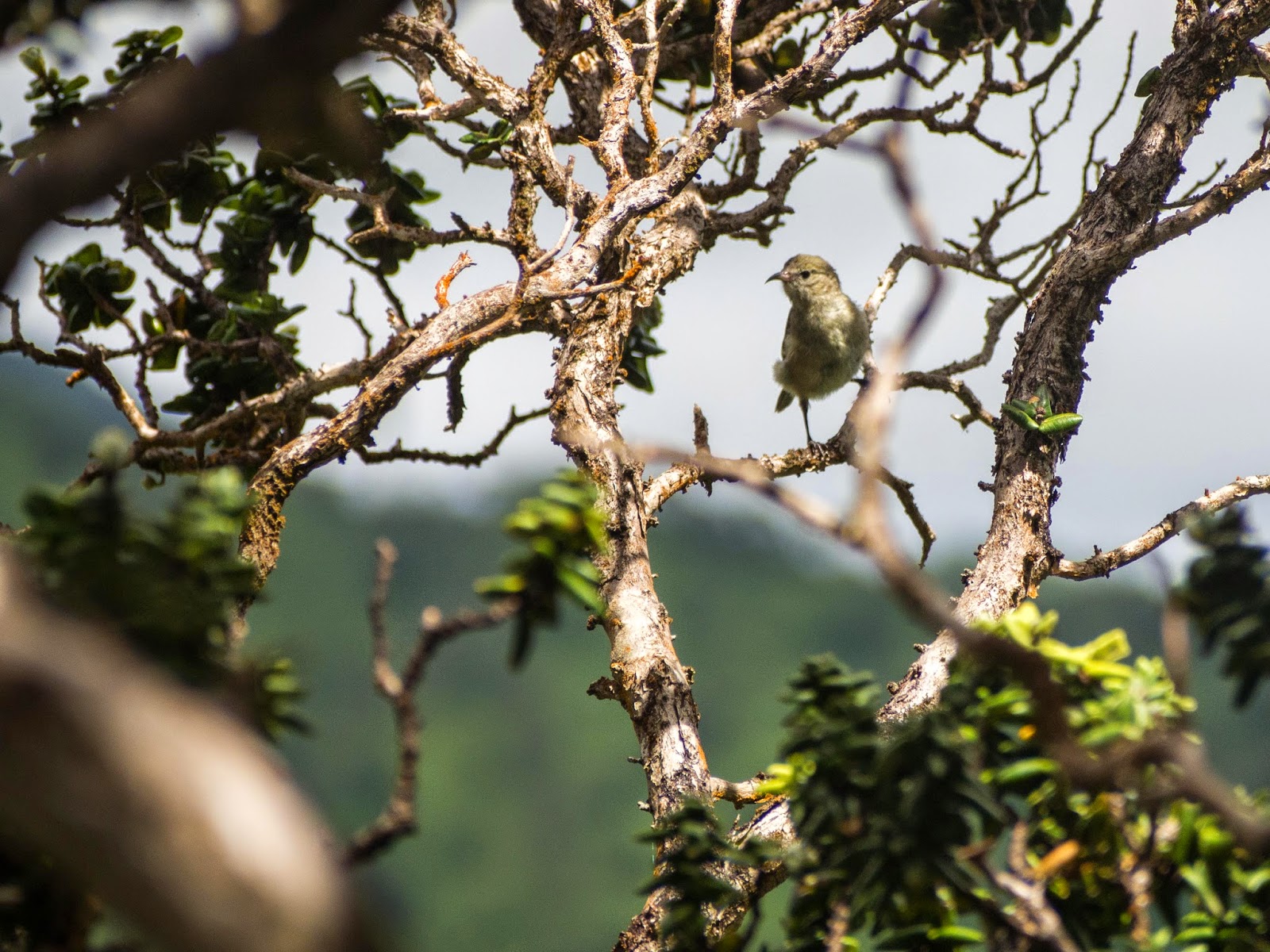 
The last of the three species left on O'ahu is the O'ahu 'elepaio (Chasiempis ibdis).  I only have one picture of the O'ahu one, this guy came really close to me to check me out. 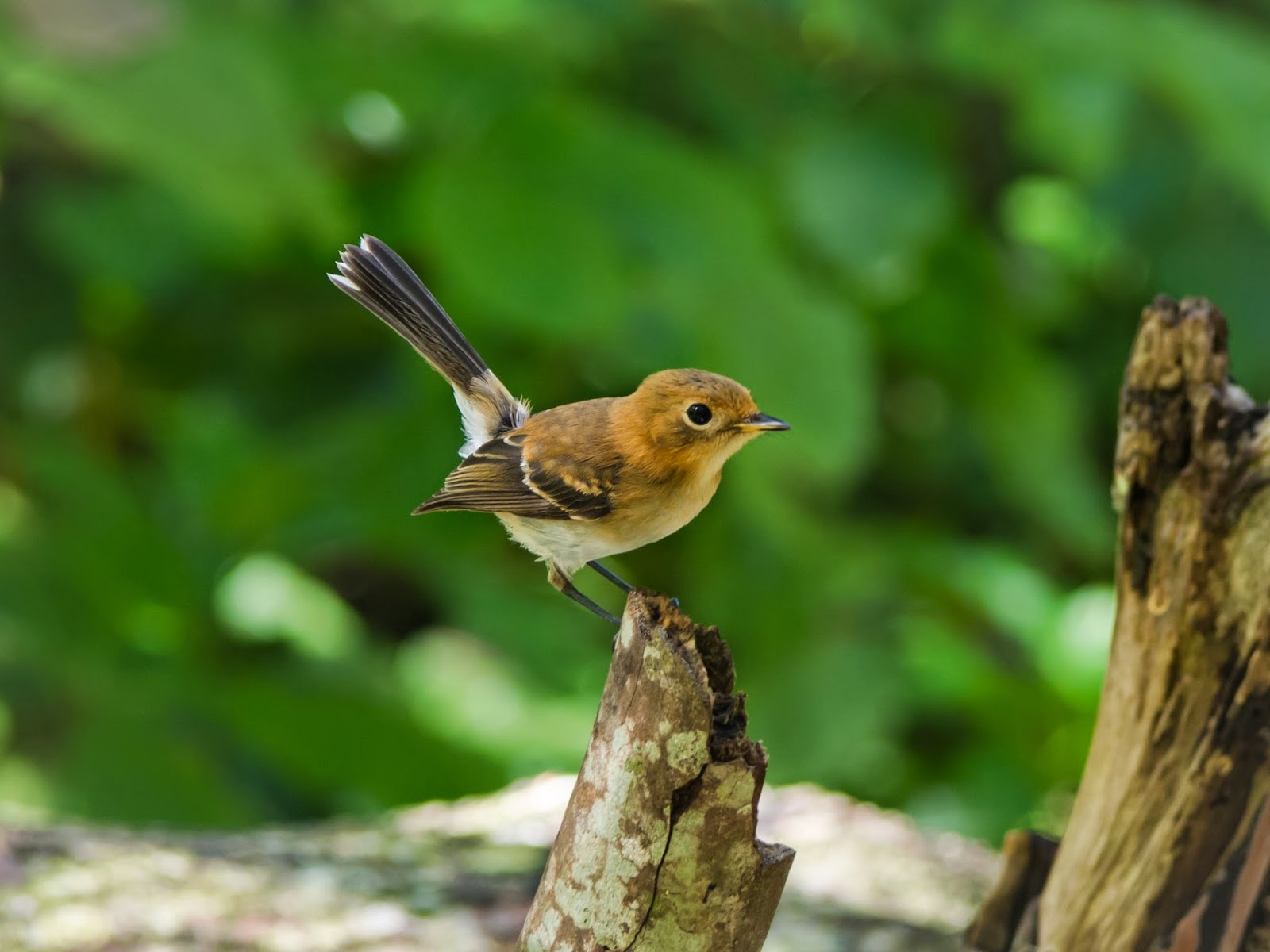 Perky shot of an O'ahu 'elepaio.


After seeing all three birds I've wondered if there might be any other birds living deep in the mountains such as an I'iwi or an O'ahu 'alauahio where they've been pushed deep or are extinct on O'ahu island.

Big Island is where I saw lots of native forest birds.  I've taken two trips to Hawai'i island and both times I went to photograph birds.  There are so many birds there if you know where to look.  One of the first time I saw an I'iwi... 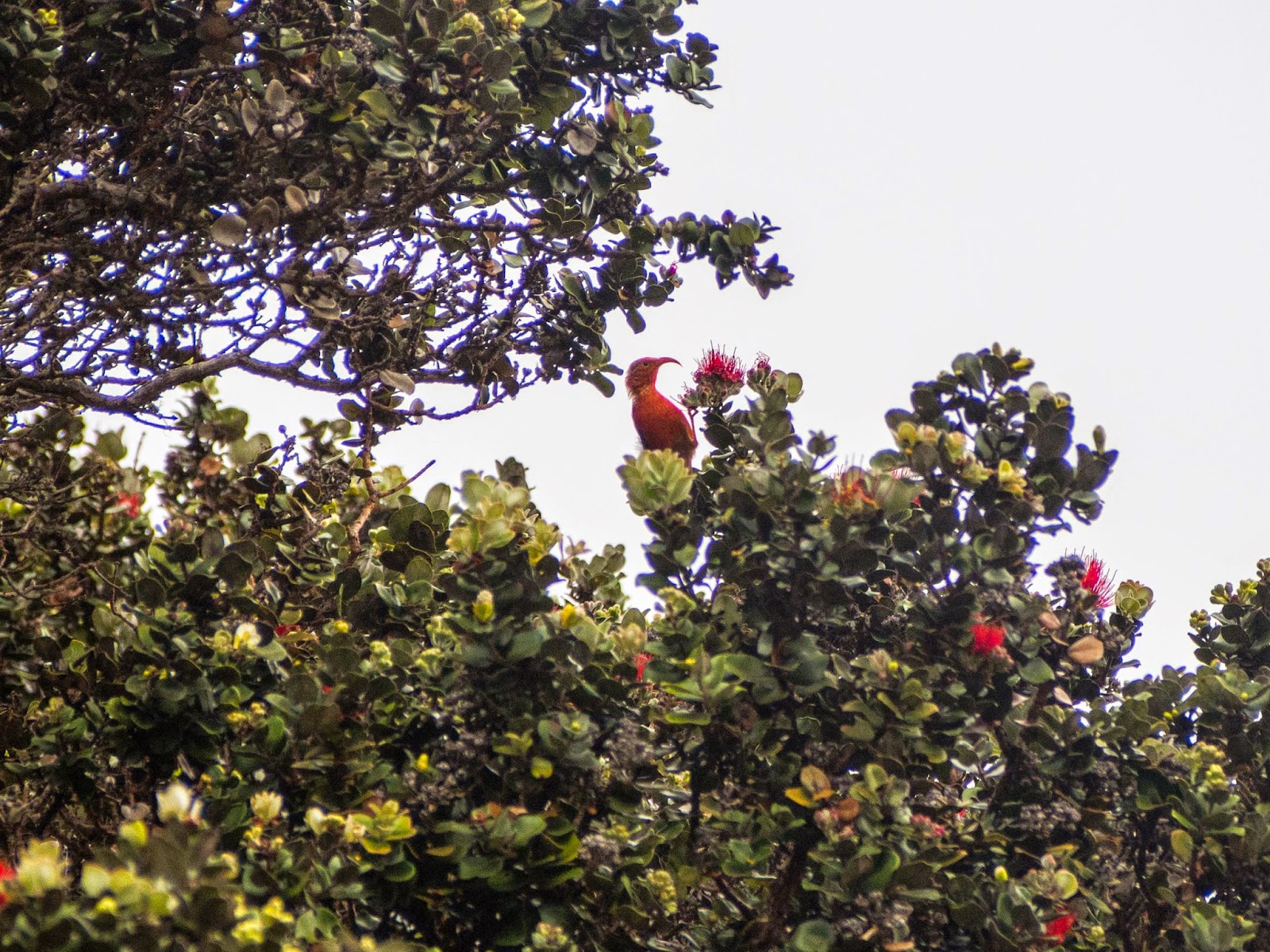 A little further down the trail I was greeted by a Hawai'i 'elepaio. 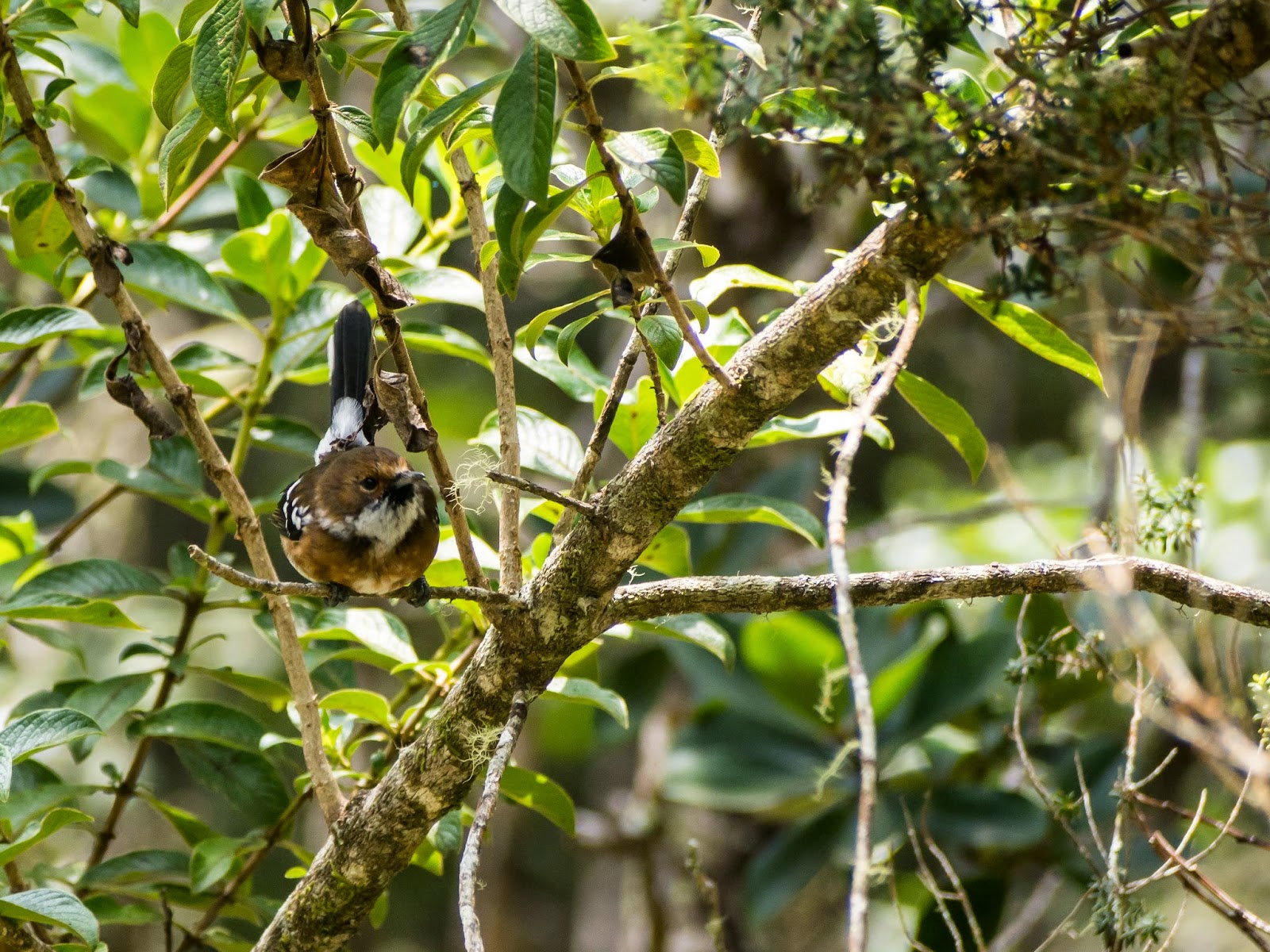 Hawai'i 'elepaio ( Chasiempis sandwichensis).  Notice the difference between the Hawai'i island one and the O'ahu 'elepaio.


Going back to the car and the trail head we saw plenty of Hawai'i 'amakihi. 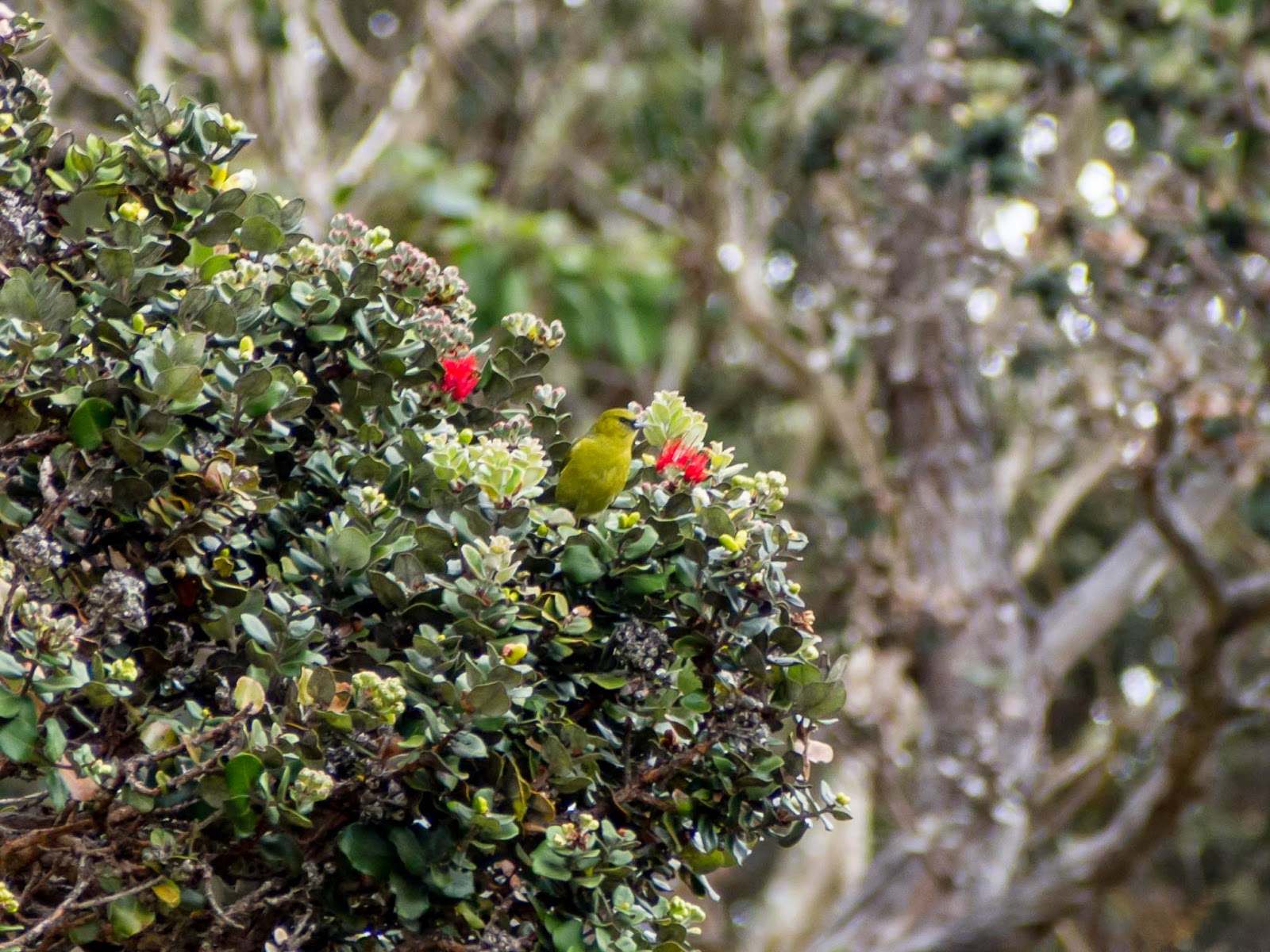 Lastly on the way down driving in our car we saw the Hawaiian hawk or I'o perched on a dead tree. 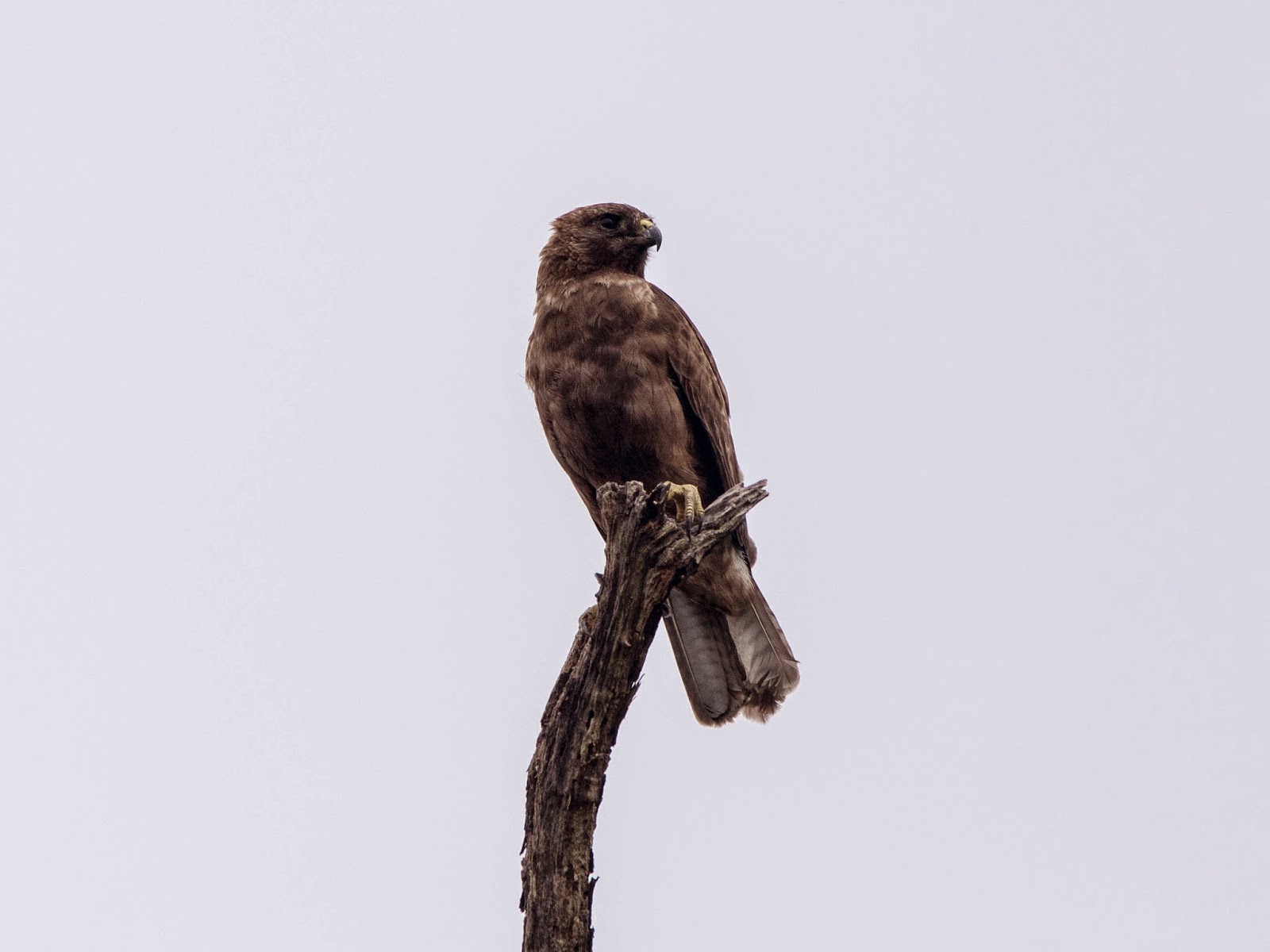 One of the only predatory birds native to Hawai'i, I'o (Buteo solitarius).


On the second trip back to the Big Island I brought along a longer telephoto lens.  There were a ton of i'iwi and 'apapane to photograph. 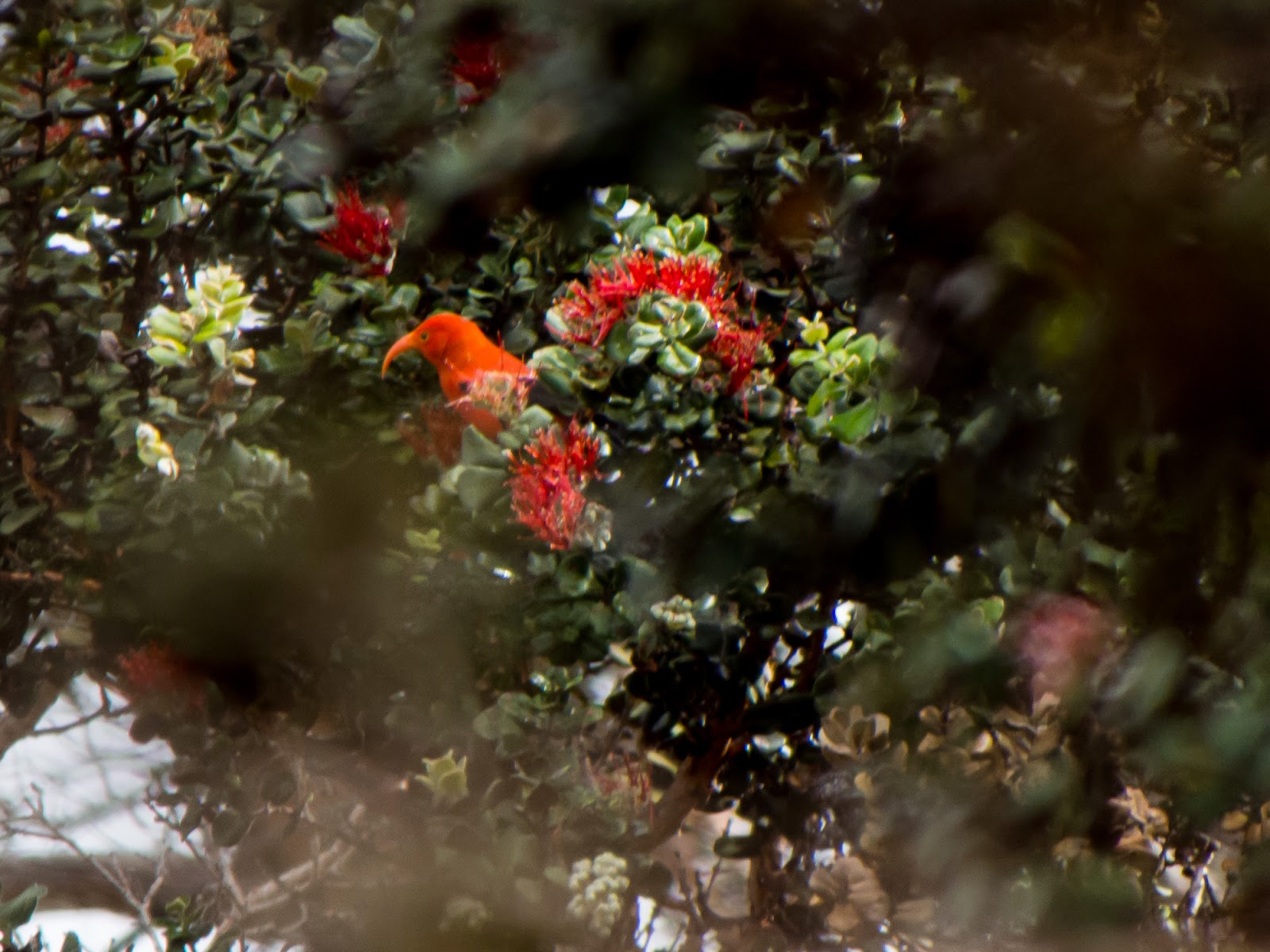 I'iwi making it's way to some ohia flowers. 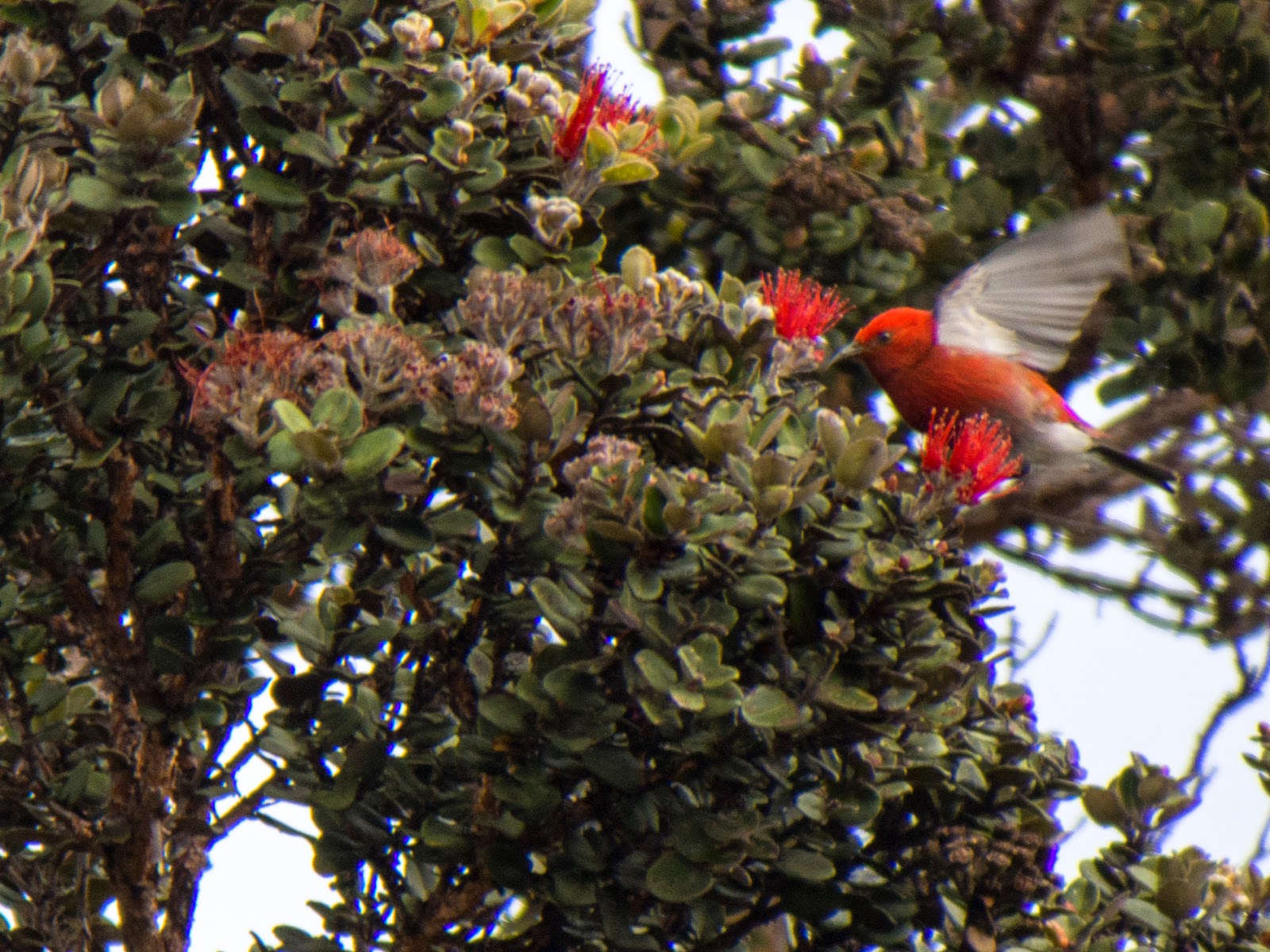 'Apapane trying to balance on an ohia tree. 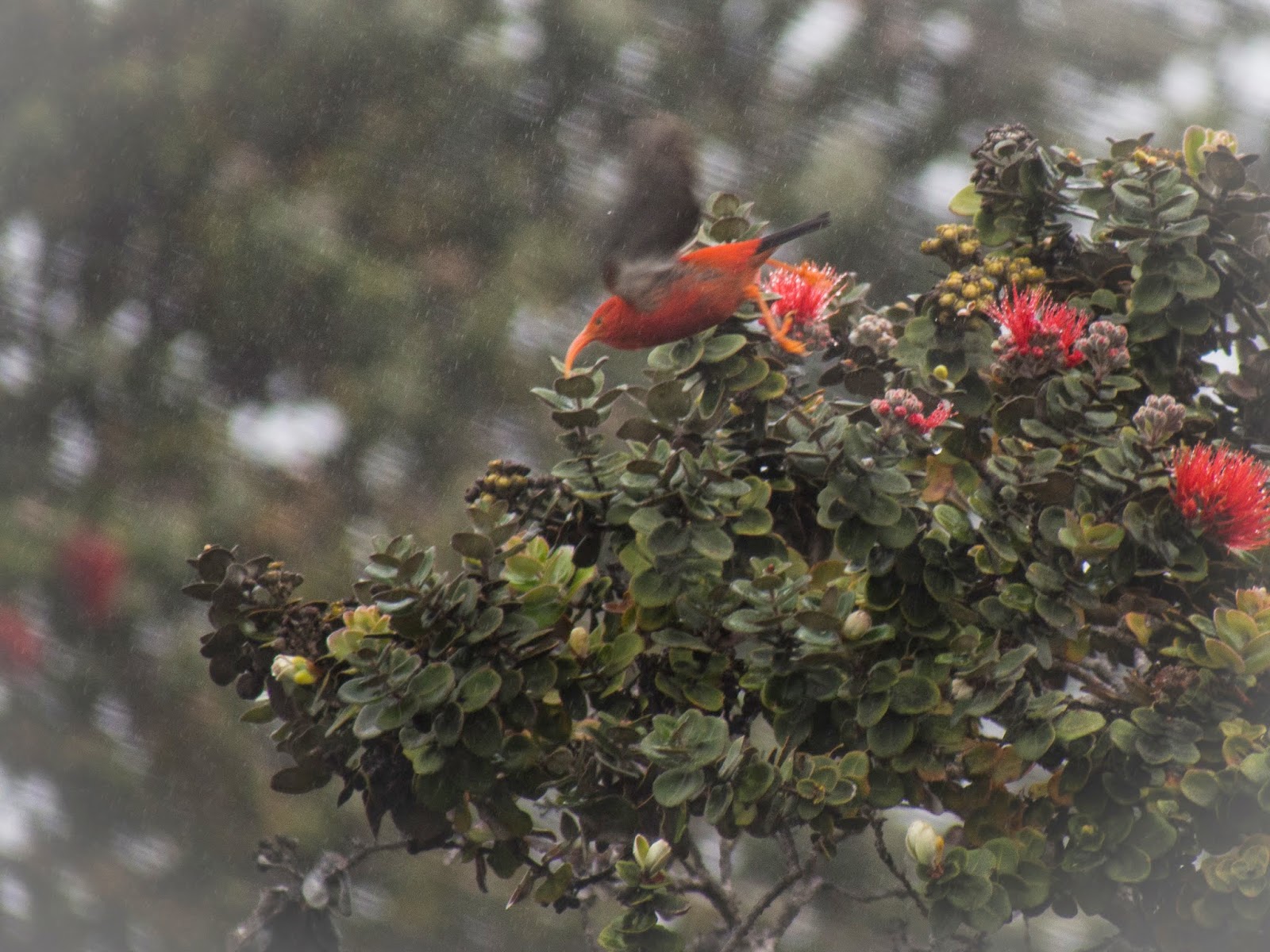 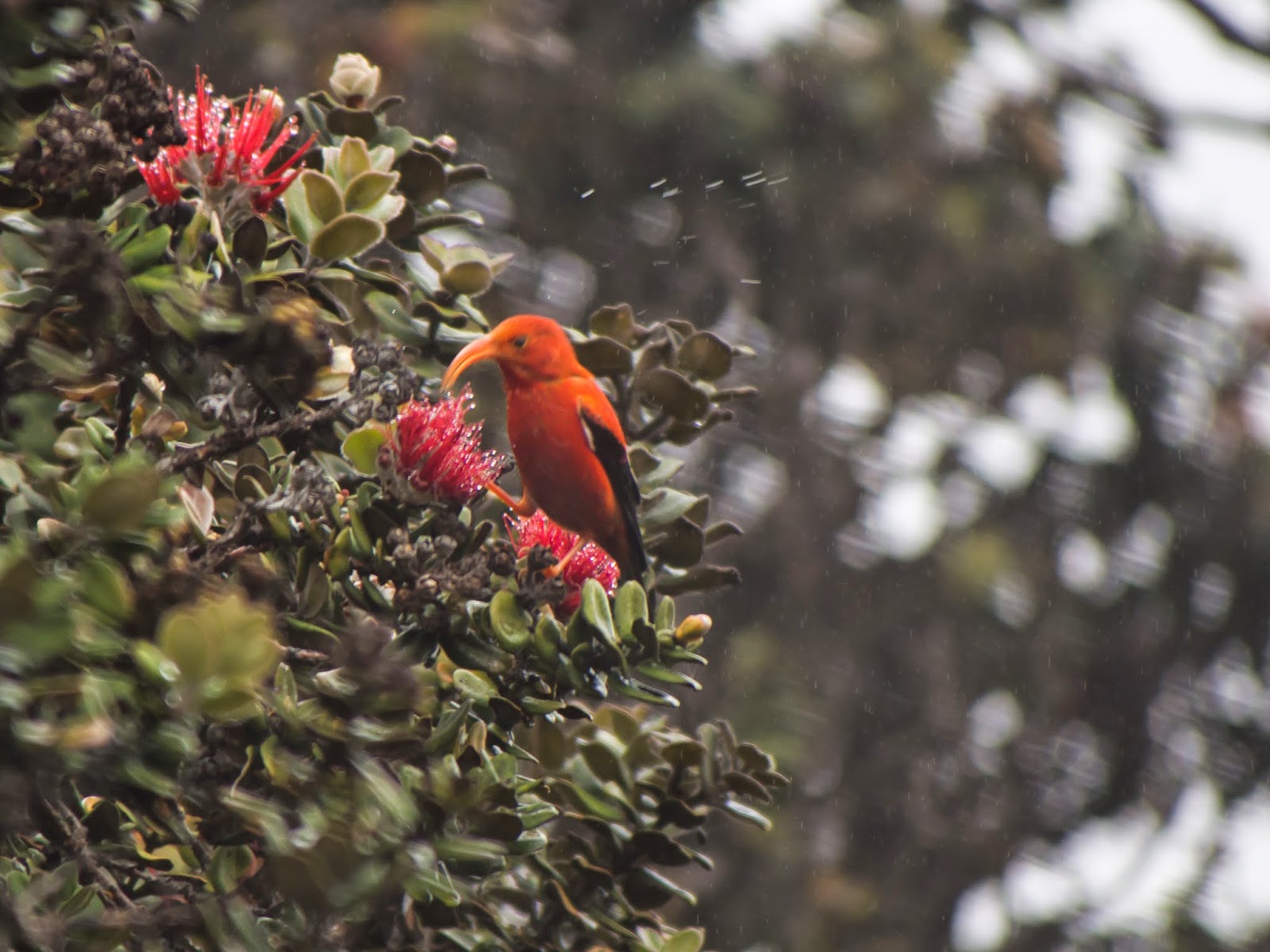 The bird was sipping nectar and flicking water off of it's bill and head. 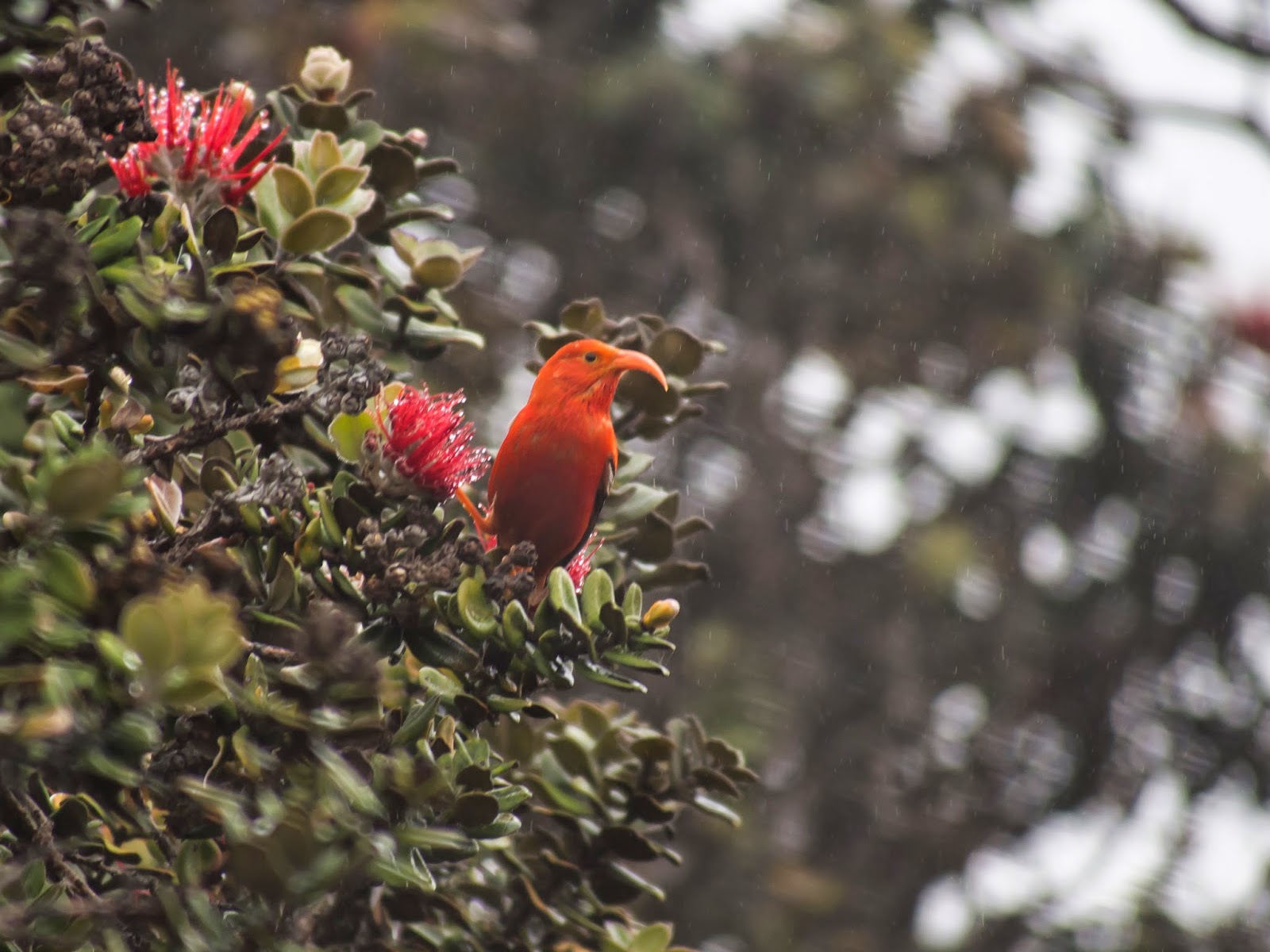 Looking for the next flower. 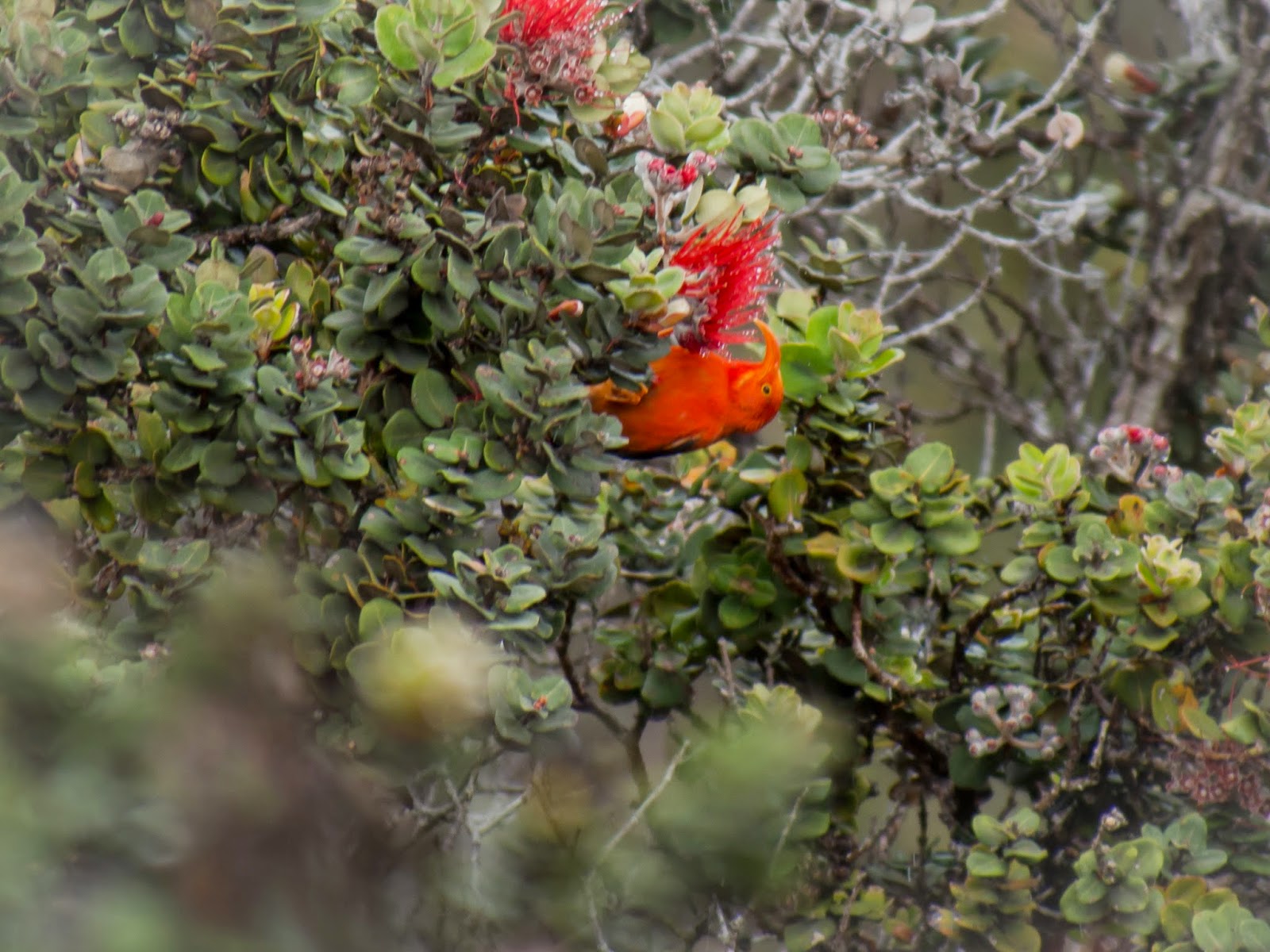 They can hang upside down and eat. 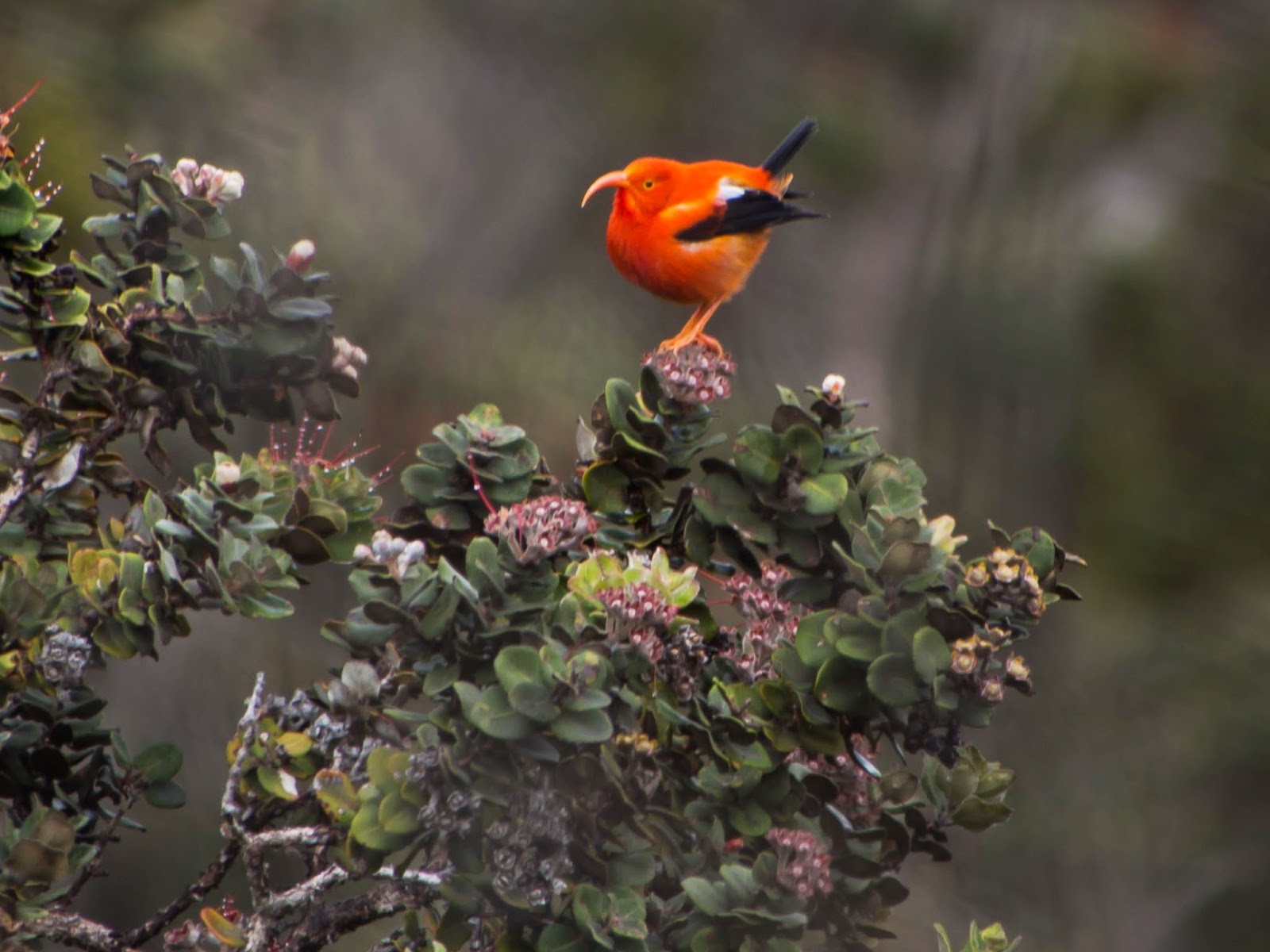 This guy posed for me! 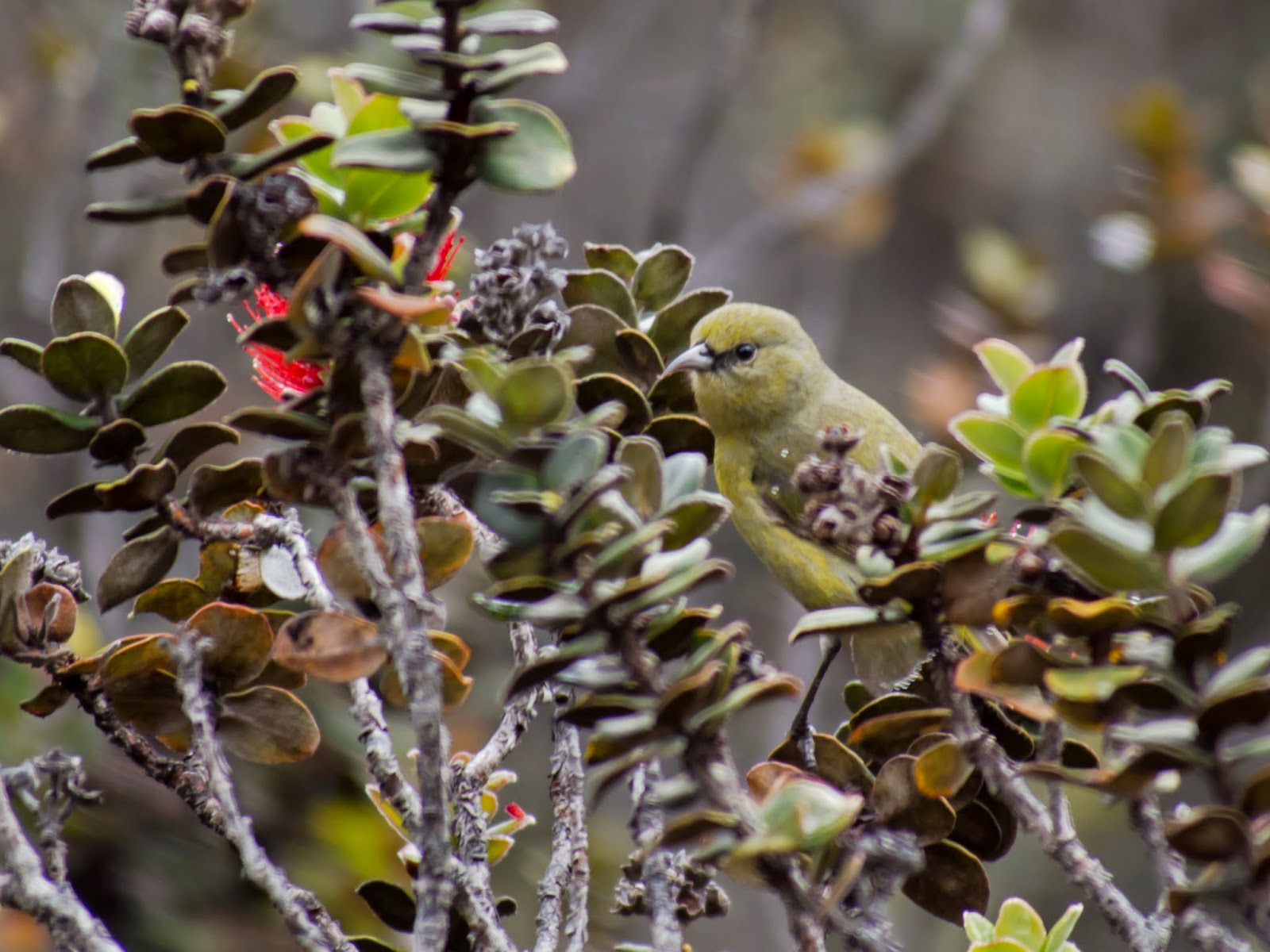 Surprised that I didn't see more of these guys around.  Hawai'i 'amakihi. 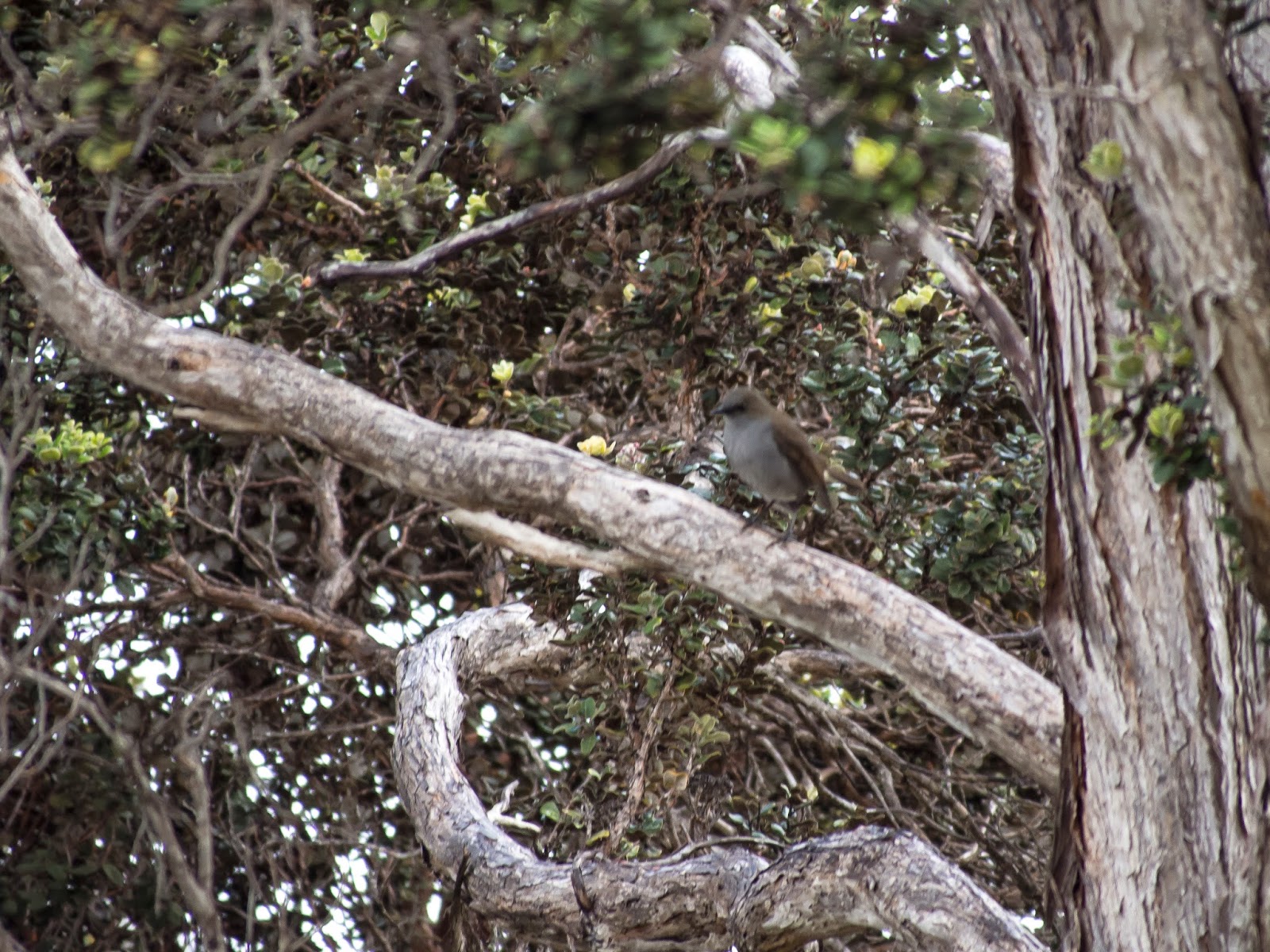 I wish I got a better shot of this 'oma'o (Myadestes obscurus).