I've always loved Maui.  It is probably my most favorite island just because it's so damn beautiful.  My girlfriend knew she had to fly to Maui for a meeting on the weekend of Labor Day.  I decided to spend the weekend there and take her and a few friends to go explore the island.  I had it all planned out.  Katie has never really gone in depth with exploring East Maui so I decided that we should go there.  Careful planning had to be done because we didn't want to waste anytime not knowing what to do.  We had a plan.  Our first day we'd just relax, do an easy hike go the beach and get our food for over the weekend.

Our first stop after our early morning flight was to grab breakfast at The Tasty Crust.  It's a diner located in Wailuku and that place has some really good banana pancakes.  I had their breakfast special and shared a short stack banana pancake with Katie.  After breakfast I suggested going on a hike with "Dramatic Scenery" as the magazine described it.  The hike was a state trail up Waihe'e Ridge.

Along with us for the first day was Jody.  We headed out and started a steady incline on the trail.  Immediately looking back the way we came we were pretty high up and had superb views of the ocean and part of Kahului.  We made our way up and on our left side we had the Waihe'e gorge and the right we could see Makamakaole.  Places I NEED to see on our next visit.  It took us a little over and hour to reach the summit.  Unfortunately we were socked in and was unable to see the West Maui Mountains.  There is a little picnic bench to rest on when you get to the top.

After hiking we got to go relax on a beach.  While the women sunbathed and relaxed I went into the water to shoot some waves.  We headed down south for that.  3 years ago I visited Maui with some friends and remembered some mean shore break at Mckenna beach park, otherwise known as Big Beach.  When we got there I saw some good size sets rolling in.  I was all amping to get in the water, I quickly put sunscreen on with fins and my gopro hopped in the water and sat at an empty part of the beach with a sandbar.  The waves came and went and I hoped to get a few good ones.  Unfortunately I wouldn't be able to see what I got until I got to the car because the Gopro doesn't have an LCD screen.  After a good hour in the waves we decided to finally run our errands.

Part of the planning was to buy food for our group flying in so that we didn't always have to eat out.  For the food we decided to cook home meals to cut down on cost for everyone.  We went to Costco in town to get the food.

Our first night would be spent camping instead of staying in a hotel room to cut some cost, lemme tell you that it was not worth it.  I barely slept.  It is a good camp but not if you don't like being hot and seeing gigantic bugs.  When we arrived it was already dark and we had to set up camp take a shower and go to sleep.  Boy was it a chore.  For some reason the wind wasn't blowing at all, which made for some hot muggy conditions in the tent.  For some reason I thought we were camping on the sand so I didn't bring a sleeping pad either and it was pretty darn uncomfortable.  By 4:45 am I had enough and told Katie let's pack up and head out to pick up our friends. 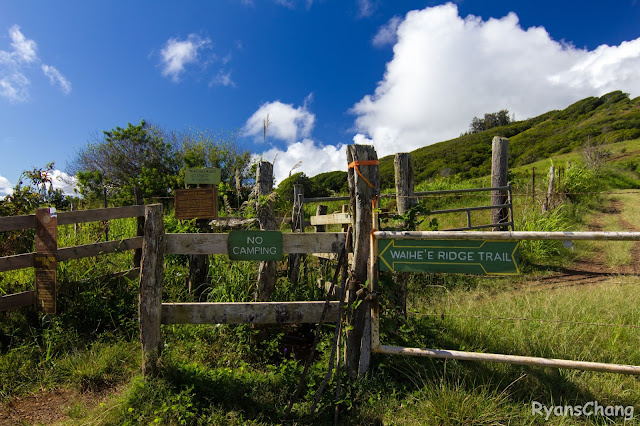 Go around this fence to start the trail. 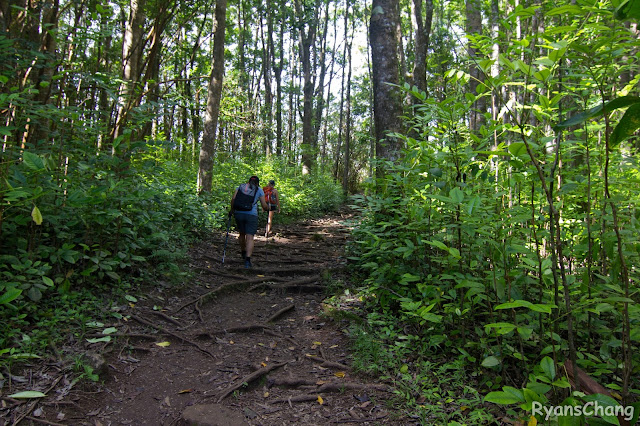 Hiking quickly through a lush forest to get to views. 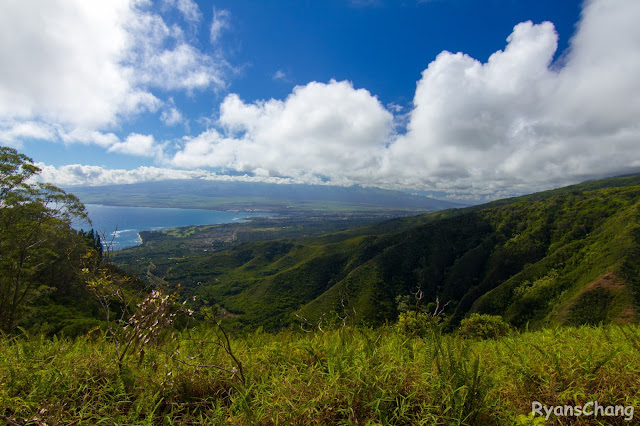 Waihe'e Valley below us with Kahului in the back.  Oh and Haleakala! 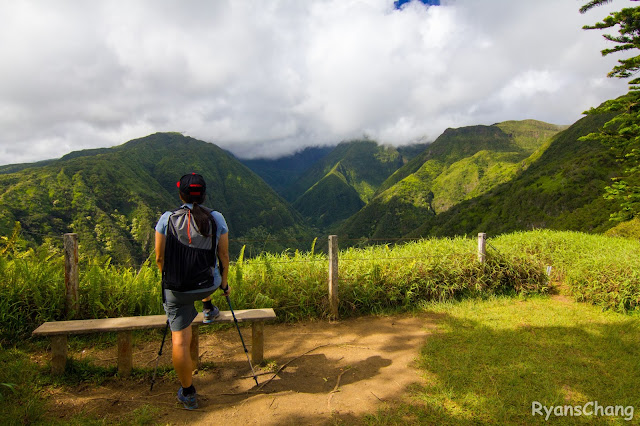 If it weren't cloudy you would be able to see the summits of the West Maui mountains. 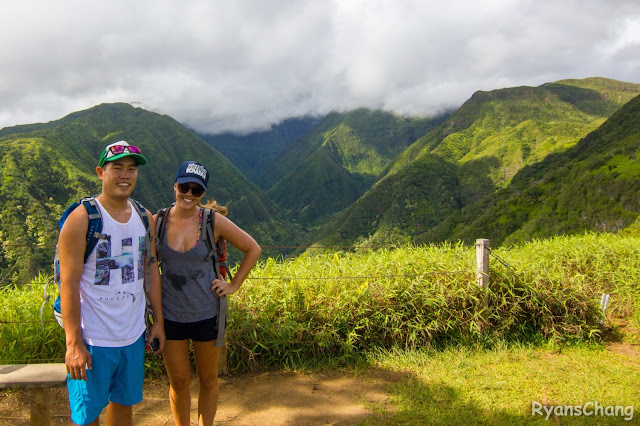 It's a good place to take a break and relax to soak in this view. 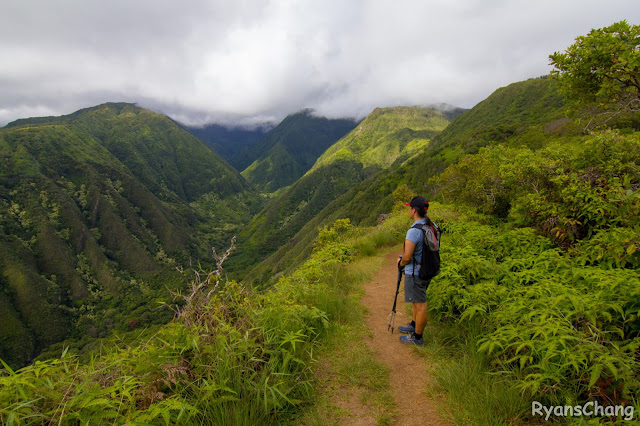 Jody getting distracted while hiking. 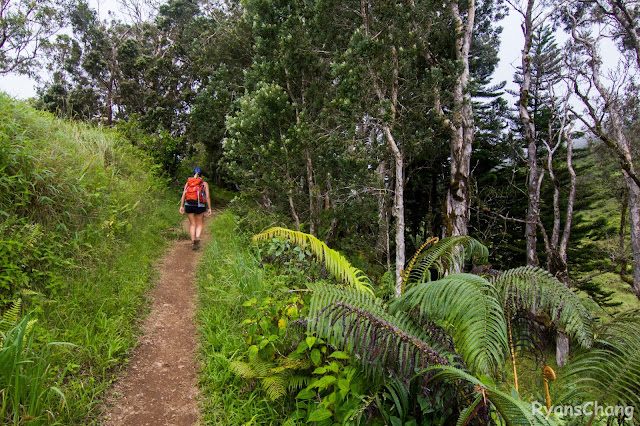 The trail keeps going for 2.5 miles to a picnic bench. 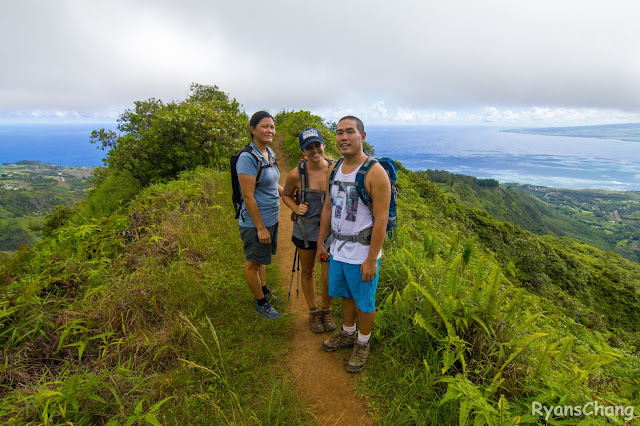 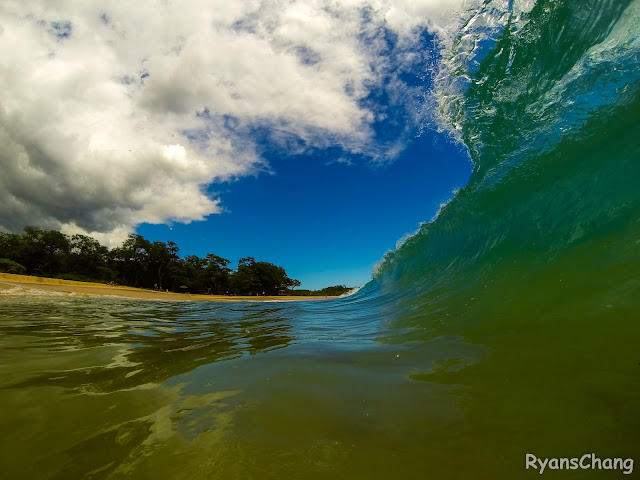 First wave of the day. 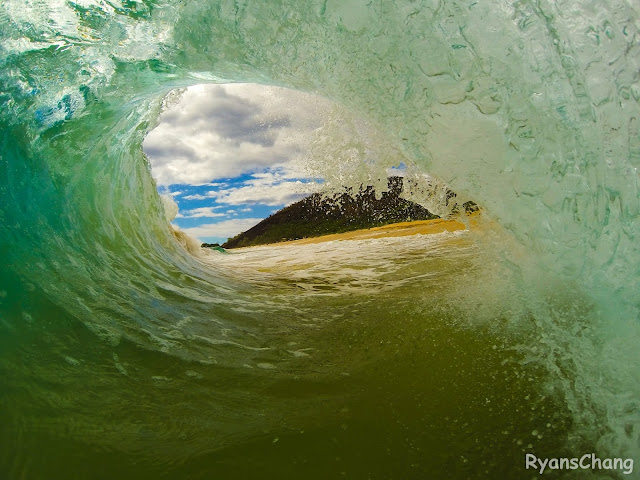 Some people say that it looks like Sandy Beach park but its not.