I was lucky enough to tag along on one of the most unseen and untouched places on Oahu.  Our friend Cory let us tag along on one of his routine inspections of his weather stations.  The people with us were Pete, Nate, and August! August and Nate love native plants and Pete loves adventure!

The day started out around 9 and we spent some time at two weather stations.  After Cory finished up we went exploring up stream.  It was about an hour and half up stream where we were greeted by a sixty foot cascading waterfall.

Along the way we rock hopped, climbed, and swam through some of the coldest water I've ever been in.  We also got to see lots of native plants along the stream bed which was very interesting.  The plants we saw only grow in Hawaii and some are on the endangered list.

When we got to the waterfall it had a large pool that you could swim in.  We all jumped in and spent a half hour or so enjoying each other company and snapping some pictures.  One of the first things I noticed that on the right side of the waterfall there was water coming straight out of the rock.  It's probably one of the first times I've seen this.  They say that it's pure enough to drink because it's been filtered by the Earth, I had to give it a try!  Hopefully I don't get any bacteria and get sick and die haha!

The last obstacle was jumping off a waterfall into a pool of cold water.  By this time I was freezing!!!!  So cold that I was making weird noises.  Eventually my body temperature got back to normal and we finished up our hike.

Please no questions on where... But enjoy the pictures and the video! Enjoying lunch after a swim in the waterfall! 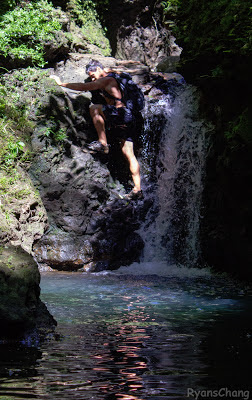 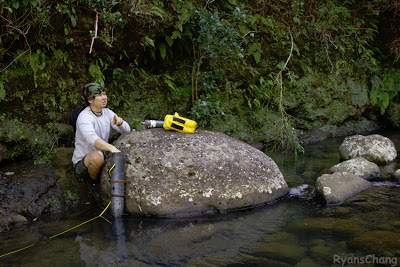 Cory working on a gauging station. 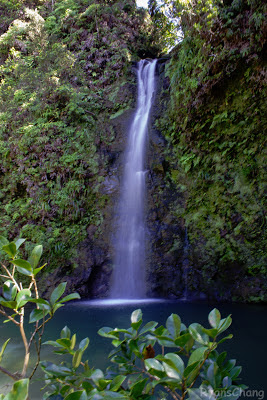 Flow!  Look carefully on the right... that's the fresh water coming out of the rock! 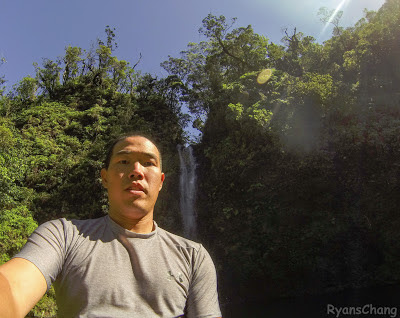 Frigid Waters of Hawaii from Ryan Chang on Vimeo.